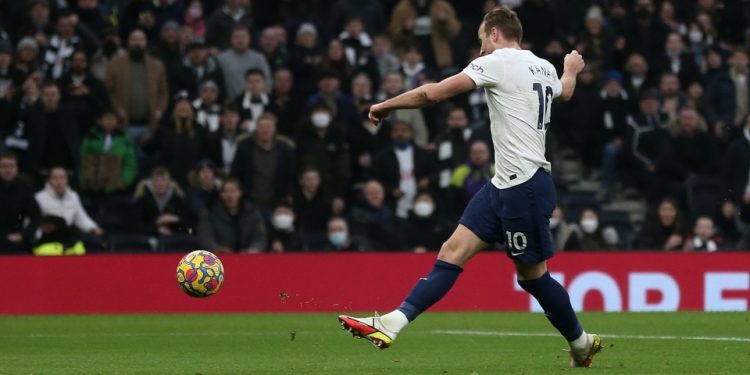 Tottenham continued their resurgence under Antonio Conte as Harry Kane, Lucas Moura and Heung-min Son struck to down ten-man Crystal Palace 3-0 in what was a routine victory in north London.

Wilfried Zaha was also sent off for the visitors as he mindlessly picked up another booking for lashing out at Davinson Sanchez to leave the visitors with virtually no chance of overturning their two-goal deficit before the interval.

Kane now has two in two under Conte

Moura also had a great game and got on the scoresheet

Zaha’s sending off was foolish to say the least

After an evenly-matched opening half hour, Kane broke the deadlock with his second Premier League goal in as many games.

The England captain latched onto a brilliant pass from Moura to stroke home.

Just two minutes later, the Brazilian got in on the act himself when he rose highest to glance home Emerson Royal’s cross into the area to put the hosts in command.

Zaha was then dismissed shortly before half-time after he mindlessly hit out at Sanchez.

His moment of madness came after he was earlier harshly cautioned for a small clip on Eric Dier.

The Palace winger did his side no favours

His second offence, though, was completely daft and inexcusable for one of Palace’s more experienced players.

It led to criticism from BT Sport commentator Jemain Jenas and host Jake Humphreys jokingly said the 29-year-old ‘took Boxing Day’ too literally in the studio at half-time.

“The thing that sticks out to me most is that Zaha’s their most experienced player,” Jenas said on commentary duty.

“This is a situation he deals with week in, week out.

“If I’m a Palace player and Palace fan, I think it’s ridiculous he’s still getting caught out for things like this.”

It was a routine victory for Spurs in north LondonAFP

Heung-min Son, who caused Palace’s defence all sorts of problems throughout the game, got his eighth goal of the season shortly before coming off.

Moura teed up the South Korean and he flicked the ball home at the near post to kill the game.

The comfortable victory means Antonio Conte has won four of his six Premier League matches since taking charge of the club.

Trudeau will be Canada’s prime minister until 2025