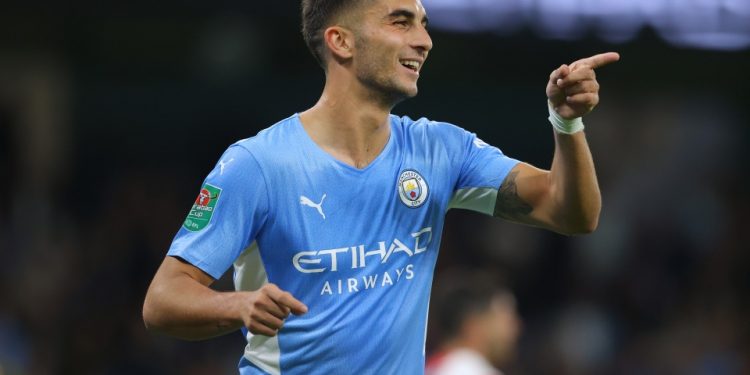 Ferran Torres’ transfer to Barcelona was completed in swift fashion as Man City confirmed on Tuesday that he had left the club.

It was only reported last week that cash-strapped Barca wanted to sign the Spaniard and make him a central part of Xavi’s rebuild.

The £50million deal was agreed last week and the 21-year-old departs just 16 months after joining.

He was a Premier League and Carabao Cup winner in his one full season at City, with 16 goals in 43 appearances.

Torres found his opportunities limited this campaign following the signing of Jack Grealish, while a metatarsal injury kept him out of action since October.

Director of Football Txiki Begiristain said: “Ferran should be proud of what he has achieved here at Manchester City.

Torres won two trophies in his 16 months at the Etihad

“Last season was his first time in a new country, but he adapted well. He always gave 100 per cent, worked hard for the team and scored goals which helped us win trophies.

“Injury unfortunately prevented him from playing more games this season, but Ferran is a player we have all enjoyed working with and we wish him all the best at Barcelona and for the rest of his career.”

All eyes will now be on what Man City do in the transfer market after making space for a new signing and also seeing a boost to their funds.

City continue to be linked with Borussia Dortmund striker Erling Haaland, who has a release clause of £64million that will become active next summer.

Harry Kane was pursued by the club in the last transfer window, but Tottenham’s demands were more than City were willing to part with.