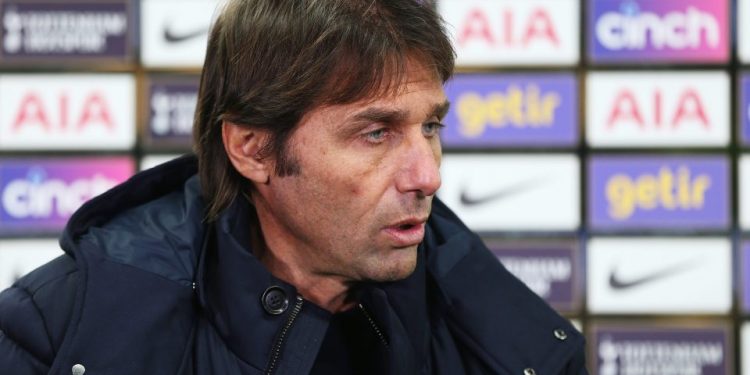 Tottenham host Chelsea on Wednesday evening in the second leg of their Carabao Cup semi-final.

Spurs have it all to do as they look to overturn a 2-0 deficit against their London rivals – and you can follow all the action live on talkSPORT.

Conte’s men have it all to do against ChelseaGetty

If their first leg showing was anything to go by, however, the club won’t have a sniff against the European champions.

Chelsea outplayed Spurs from start to finish in the match and perhaps the only consolation for Antonio Conte is that it wasn’t three or four.

There’s a glimmer of hope that Spurs can perform a miraculous comeback but the odds are heavily stacked against them.

Harry Kane, who had an night to forget in the first leg, will have to be in form if the Lilywhites are to stand a chance.

Unfortunately for the Spurs faithful, Kane’s record in semi-finals and finals in his career to date is woeful.

Both for England and at club level, he has, more often than not, fired a blank on the biggest stage.

In fact, he has just three goals in 13 semi-final and final appearances collectively during his career.

In his last six appearances in a semi-final or final, Kane has only scored one goal and has only won twice.

Have a look at his record, below…

Harry Kane has been on the losing side of the Champions League final and two EFL Cup finals with Tottenham, and a European Championship final with EnglandGetty Images – Getty

For Tottenham and England**

2015 League Cup final vs Chelsea – no goal or assist

2018 World Cup semi-final vs Croatia – no goal or assist

2019 Champions League final vs Liverpool – no goal or assist

2021 League Cup semi-final vs Brentford – no goal or assist

Kane’s recent record and Spurs’ overall form in recent weeks suggests that a Chelsea victory in the tie is a formality.

But anything can happen in football and Spurs have a manager who is used to overachieving.

Conte led Chelsea to the title in the 2016/17 season against the odds and he has been a serial winner throughout his career.

However, Daniel Levy faces a fight to keep the Italian in N17 as Conte demanded he needs to be backed in the market.

“I signed a contract for this season and next season. I think that we decided together, the club and I, to go for this decision,” he said after his side’s defeat to Chelsea last week.

“I think that I don’t need a long contract to be sure to work for a club. I think that the club has to appreciate my job and then extend my contract. But only if I showed the club I deserve this.

“I repeat, I’m not a coach that wants many years of a contract. Also, it’s not fair. Because I know very well I’m a top coach with an important salary for the club.

“I’m open to improve the Tottenham situation and I decided to sign a contract with this club and I’m available to give my opinion, to give my vision and it won’t be a problem for me, a short contract – only one year to go.

“It won’t be a problem and I don’t want to commit to clubs for many years because I understand the salary is an important salary for the club and I have to deserve this type of contract.

“It’s OK because Tottenham has to be sure 120 per cent to continue to work with me.

“I’m happy to work with this group because they are giving me great availability. But at the same time, you know the club has to know my vision, has to know my opinion about the situation and especially what is our ambition.”

Tourists evacuated from Pescara as Italy records more than 800 wildfires