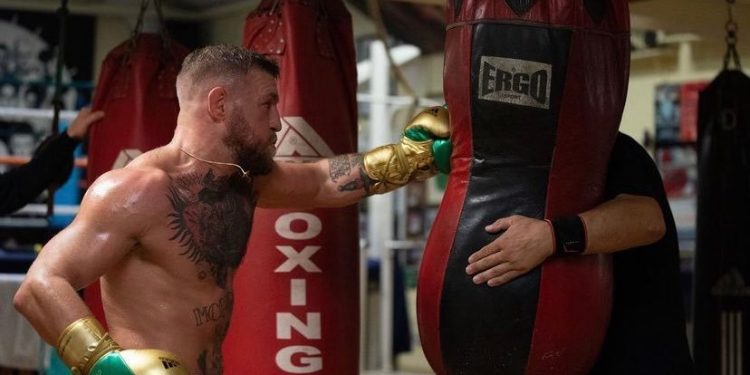 UFC fan favourite Nate Diaz continues to distance himself from a trilogy fight with Conor McGregor, who is expected to return from injury later this year.

The Irishman suffered a fractured tibia and fibula at UFC 264 in July 2021 but is now back in training to prepare for his eagerly anticipated comeback.

McGregor has announced his intention to return at welterweight as he eyes a shot at the current 170lb champion Kamaru Usman, but a fight with Diaz seems much more likely – even though the man himself isn’t interested.

“I been trying to fight everybody and no go what’s the hold up ufc? I’m not fighting Conor he sucks. I’ll fight some one quit slow rolling me please Thanks,” Diaz wrote on Twitter.

McGregor and Diaz have fought each other twice already and are currently tied 1-1 ahead of what would be an epic tie-breaking trilogy fight.

In their first bout, Diaz scored a monumental upset when he became the first person to beat ‘Notorious’ in the UFC back in 2016.

?
I’m not fighting Conor he sucks.
I’ll fight some one quit slow rolling me please
Thanks

McGregor begins countdown as he eyes Usman, Oliveira and Gaethje for UFC return

After weathering an early storm at UFC 196, Diaz rocked the Irishman before locking up a rear-naked choke submission in the second round.

McGregor got his revenge when they rematched at UFC 202 less than a year later.

Both men went to war over five rounds, but it was ‘Mystic Mac’ who ultimately emerged victorious by way of a majority decision verdict.

Diaz hasn’t fought since falling to a lopsided decision defeat against British welterweight star Leon Edwards at UFC 263 in June 2021.

The 36-year-old currently has just one fight left on his UFC contract and has repeatedly expressed his desire to compete as soon as possible.

Diaz wants to explore lucrative options in free agency, such as a fight with social media star turned boxer, Jake Paul, who is currently looking for an opponent for his next fight in August.

So far, Diaz’s cries have fallen on deaf UFC ears as they are yet to book him a fight.

It appears that the MMA leader is holding Diaz back as they hope to match him up against McGregor. It remains to be seen if either man would be willing to take that fight at this time.

All you need to do is answer at least three quiz questions correctly for a chance to enter into the main prize draw.

If you play everyday you could win one of our daily prizes, so what are you waiting for?

Own the game and join talkSPORT Trivia today.

Any evidence of lockdown-breaching government parties will be passed to police, says UK minister