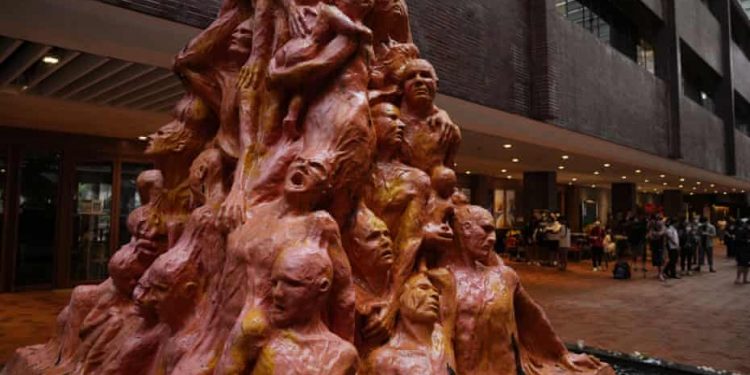 Hong Kong’s oldest university has removed a statue mourning those killed in Beijing’s Tiananmen Square in 1989 and posted guards at the site where it has stood for more than 20 years.

The 8-metre-tall Pillar of Shame by the Danish sculptor Jens Galschiøt was one of the few remaining public memorials in the territory commemorating the bloody crackdown that is a taboo topic in mainland China, where it cannot be publicly marked. It had sat on the University of Hong Kong (HKU) campus since 1997, the year the city was handed back to China.

Late on Wednesday, university staff used floor-to-ceiling sheets and plastic barriers to shield the statue from view, according to witnesses at the scene. Loud noises from power tools and chains emanated from the closed-off area for several hours before workmen were seen carrying out the top half of the statue and winching it up on a crane towards a waiting shipping container.

In October, HKU officials ordered the removal of the sculpture, which features 50 anguished faces and tortured bodies piled on one another and commemorates the pro-democracy protesters killed by Chinese troops around Tiananmen Square in 1989.

Security guards have blocked reporters from approaching and tried to stop media outlets from filming. The university did not respond to requests for comment.

Galschiøt told the Guardian he was “shocked and saddened” by the developments. “I’ve asked Hong Kong University to allow me to go and collect it in person, but I received no response,” he said. “If they destroy my work, I’ll seek compensation and demand the remaining pieces to be returned to Europe.”

“This is not about the national security law. This is my private property. It’s the Hong Kong law that says the authorities cannot destroy private properties like this.”

Earlier, the artist sent an email to supporters encouraging them to “document everything that happens with the sculpture”. “We have done everything we can to tell [HKU] that we would very much like to pick up the sculpture and bring it to Denmark,” it said.

Until recent years, Hong Kong was one place in China where mass remembrance of Tiananmen’s dead was still tolerated, but the city is being remoulded in China’s own authoritarian image in the wake of huge and often violent democracy protests two years ago.

In the past year, scores of opposition figures have been jailed or fled overseas, and authorities have embarked on a mission to rewrite history and make the city more “patriotic”.

‘I can’t work’: the mothers left to fight alone for their children’s mental health care