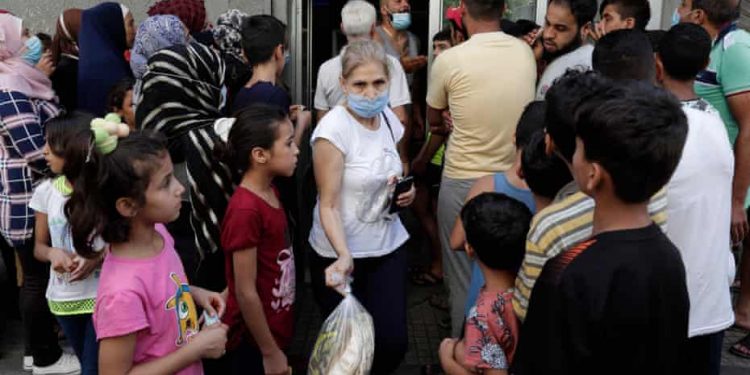 When Lebanon’s Muslims sat down to their first iftar of Ramadan tonight, the meal in front of them will have cost significantly more than it did six weeks ago.

The Middle Eastern country, already mired in economic crisis and battling inflation before the war broke out in Ukraine, now finds itself grappling with even higher price rises for wheat and cooking oil.

“In 2021, when the prices were already up, I was using the same oil to cook several dishes,” Mona Amsha, from Beirut, told the Thomson Reuters Foundation this week. “Now, I can’t even do that.”

The fears around wheat imports – more than 60% of which came last year from Ukraine – are particularly acute because Lebanon’s reserves are limited. The huge explosion that tore through Beirut’s port in August 2020 and killed more than 200 people also destroyed the main grain silos. As a result, the country is thought to have enough wheat to last only about six weeks.

The government has said it is trying to secure fresh imports from India, the US and Kazakhstan – all of which would entail grain travelling much longer distances on increasingly expensive shipping routes. Meanwhile, according to agriculture minister Abbas Hajj Hassan: “There is no wheat crisis today in Lebanon.”

But shortages are already starting to show on supermarket shelves; some bakeries are rationing bread, and the price rises since the start of the Russian invasion of Ukraine are obvious, says Bujar Hoxha, country director for Care International.

“From 24 February to 21 March we have seen a general increase of 14% on food prices,” he says. “For bread, for example, it’s 27%. For white sugar it’s 72%. For sunflower oil it’s 83%.” Fears are also mounting over the cost of fuel, essential to the supply of electricity and water.

Few sections of society are more vulnerable to these changes than Lebanon’s 1.5 million Syrian refugees, most of whom live in abject poverty and are dependent on food aid. Many fled Russian bombardment in their homeland and are now preparing to feel the knock-on effects of another of Vladimir Putin’s wars.

“When we think of poverty, I always try to use the sea level,” says Hoxha. “If there are Lebanese living below the poverty line, we always have to imagine Syrian refugees being minus-20 sea level on that poverty line.”

The decision of some countries to bar exports has exacerbated the problem. Last week the Lebanese prime minister, Najib Mikati, asked Algeria to exempt it from a ban on sugar exports imposed in mid-March. Hoxha says Care tried to buy vegetable oil from Turkey but had been unable to do so.

The next few months, then, could be challenging, and hopes for the holy month are decidedly low. “This will be one of the most difficult Ramadans that Lebanon has faced,” says Hoxha. “We thought it was last year. We thought a year before that. But this one will be particularly difficult.”

The worst drought for four decades; hunger so widespread that famine could develop within months; a resurgence in violence by jihadi terrorists seeking to overthrow the fragile government: even before Russian tanks rolled into Ukraine on 24 February, Somalia had more than enough on its plate. Now, with the invasion paralysing the breadbasket of the world, the east African country is having to contend with yet another challenge: the skyrocketing price of staple goods.

In Somalia, where about 1.4 million children under five are thought to be acutely malnourished and more than 4 million people are reliant on emergency food aid, price increases of any size are going to have an impact. And while it does not depend as heavily as some countries on wheat imports, Somalia has many other reasons to fear the ripple effect of the war in Ukraine.

Petroc Wilton, a spokesperson for the UN’s World Food Programme (WFP), says most of the agency’s food assistance in Somalia was done through cash transfers, which were highly vulnerable to market fluctuations. “Any major impact on the purchasing power of the people that we serve due to sudden price changes is a real concern, particularly in context of this very, very severe drought,” he says.

The drought gripping the country has been building since October 2020, and the UN has warned that Somalia could be tipped into famine this year if the rains expected in the next few weeks aren’t plentiful enough. In 2011, the last time Somalia saw famine, almost 260,000 people are believed to have died.

Before the invasion of Ukraine, food prices had already been increasing because of the drought, with livestock dying or decreasing in quality, and harvests of cereals such as sorghum well below long-term averages. “The medium-term effects of the Ukraine crisis are just an extra reason for very serious concern,” says Wilton.

WFP in Somalia is “just about” to receive the last shipment of food – a delivery of yellow split peas – that left the port of Odesa before it was forced to shut, Wilton adds. “After that, we currently don’t have any visibility on further expected shipments. So yes, there is a real concern that scarcity of some of these commodities coming into Somalia and the region could drive prices up.”

For decades, tens of millions of Egyptians have been able to pop to their local bakery and pick up subsidised flatbread for just a few pennies. The bread is so central to the Egyptian way of life that it is known as aish – literally, “life”.

Soon, however, that fixed price could rise, as the government seeks to respond to the rise in wheat costs resulting from the Russian invasion of Ukraine. Egypt, the world’s top importer of wheat, is particularly vulnerable to the price shock, and consumers are already seeing big increases in the cost of non-subsidised goods.

Last year, Egypt imported more than 70% of its wheat from either Russia or Ukraine, according to the UN, so the first challenge for the state is to seek alternative suppliers away from the Black Sea. This week, France’s agriculture minister, for one, said his country would “stand by” Egypt “to make sure it gets the wheat that it needs in the coming months”.

But there are problems with most of the alternatives. Wheat from France has in the past been considered too moist. Other big exporters such as Australia or Canada bring with them significant extra costs in terms of transportation, especially in a time of high fuel prices.

In an interview last month, the minister of supply, Ali El-Moselhy, implored Egyptians not to worry, saying that the country’s stocks were sufficient for at least four months and that there was “a political will and vision to maintain wheat reserves”. The local harvest, he added, according to Bloomberg, was expected to bring in 1m tonnes more than anticipated.

However, with the average price per tonne of imported wheat about $100 more expensive now than last year, many also expect the government to act on the subsidised loafs. The programme had already been a target before the Ukraine invasion; last year President Abdel Fatah al-Sisi declared: “It’s not realistic that I sell 20 loaves for the same price as a cigarette … This must stop.” Now such a move seems inevitable.

But in a country where about a third of the population live below the poverty line, it remains to be seen if the government is prepared for the social ramifications. “When prices jump, and poor people cannot feed their families, they will be on the streets,” warns Kristalina Georgieva, the managing director of the International Monetary Fund, last weekend. “One thing we know about trouble in one place, it travels. It doesn’t stay there.”

Sign up for a different view with our Global Dispatch newsletter – a roundup of our top stories from around the world, recommended reads, and thoughts from our team on key development and human rights issues, delivered to your inbox every two weeks:

‘Paying £9,000 a year for Zoom calls is mad’: apprentices on how Covid-19 changed university plans