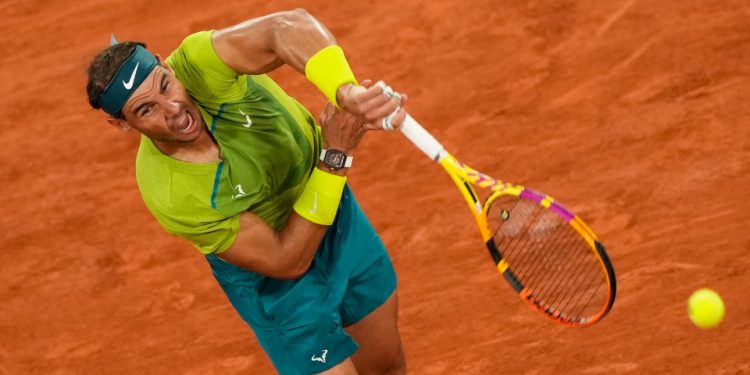 Rafael Nadal has a not-so-secret weapon he’ll be unleashing at Wimbledon in his pursuit of a historic Calendar Slam.

The Spaniard’s incredible year started with winning the Australian Open, before he reaffirmed his moniker as the king of clay with a 14th French Open triumph.

Nadal is naturally right-handed but plays tennis with his leftGetty

The Spaniard is renown for the size of his serving armGetty

The 36-year-old has battled several injuries over the last year but will finally return to SW19 for the first time since 2019 next week.

But what fans might notice during Nadal’s run to secure a third victory at the All England Club is the disproportionate size of his arms.

The World No.4 is renowned for his bulging left limb that he uses to serve.

Nadal has addressed the attention his famous arms have received during his career and believes the fact that he used to play sleeveless meant they were on show more.

He told Men’s Fitness: “This is funny, if you look at many other players they are probably fitter than me.

“The difference probably is that I was playing sleeveless. Now that I carry shirts with sleeves it doesn’t look that different.

“And also my left arm is much more developed than my right arm.

“This is because I play lefty and that’s sort of my gym, the tennis court. That’s where I have fun.”

Nadal playing with his left also allows him to hit deep cross-court to the right-hander’s less-practised backhand.

He wasn’t born with such a beefy advantage however, as Nadal is actually right-handed!

“For me, it’s (the stroke in golf) like a backhand,” Nadal told Marca.

The legend goes that Nadal’s Uncle Toni, who coached him from an early age, forced him to change hands to gain an advantage.

Yet the man himself disputed that, telling Tennis Magazine: “It’s really not the truth. At the start, he played with two hands but using one hand to direct.

“I had the impression that he was stronger on his left side than on his right side. So, I figured that he was left-handed; it’s as simple as that.

“Besides, even if he ate with his right hand, he also played football with his left foot. However, at no point did I tell him he needs to play with his left hand because that way, he will be much stronger.

“However, since I’m not completely stupid, I simply advised him to use his strongest hand. That’s it.”

Toni added: “Would Rafa be as strong now if he used his right hand? That’s something we don’t know and we will never know.”

In Boston, an Approach to Housing That Avoids Eviction

New Year’s Eve 2021: celebrations around the world amid concern over Covid – live updates