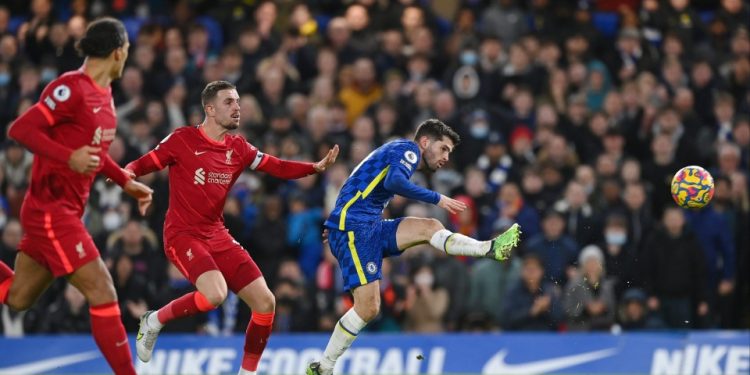 Thomas Tuchel’s decision to ostracise Romelu Lukaku proved a masterstroke as his ferocious Chelsea side roared back from two goals down to secure a 2-2 draw with Liverpool.

The Belgium international, who had scored twice in his previous two games, was dropped completely from the squad for comments he made about his love for former club Inter Milan.

With their record signing and senior striker not even on the bench, Chelsea got off to the worst possible start and found themselves down two goals inside just 30 minutes.

Sadio Mane scored his first goal in ten games before yet another super solo effort from Mohamed Salah appeared to put the Reds on course for a routine away win.

Yet a thunderous volley from Mateo Kovacic sent the Stamford Bridge crowd into raptures as they thought about an equaliser, before Christian Pulisic beat Caoimhin Keller to restore parity.

In perhaps one of the best games of the season, neither side could find a winner, with the Covid-riddled Jurgen Klopp at home surely seething at his side’s inability to hold onto their lead.

It almost turned out to be the worst possible start for Liverpool when Mane was booked inside 15 seconds for an elbow on Cesar Azpilicueta from the kick-off.

The Senegal international protested his innocence to referee Anthony Taylor, but Tuchel was left to fume and remonstrate in his dugout on the far side.

If the German was frustrated by his side’s start, a poor clearance from Trevoh Chalobah would have made his blood boil as the youngster inexplicably allowed Mane in behind from a routine through ball and he rounded Edouard Mendy to score.

Mane was playing his final game before heading off to the African Cup of Nations, just like Egypt superstar Mo Salah, who finally scored his first goal as a Liverpool player upon his return to Stamford Bridge.

After taking a wonderful pass from the typically accurate Trent Alexander-Arnold, Salah burst past Marcos Alonso with consummate ease and then dinked past Mendy.

His 25 goal contributions in the Premier League this season is unmatched and Liverpool, without Alisson, Joel Matip or Roberto Firmino, seemed in a comfortable position.

However, whilst Salah’s goal had all the subtlety of a surgeon’s scalpel, a thunderous volley from Kovacic on the edge of the box got Chelsea back into the game as replacement keeper Kelleher watched the ball clatter in off the post.

The Bridge was rocking and, perhaps not burdened by the composed Jorginho, pressed and harried the visitors and played the sort of rock and roll football Klopp has employed on Merseyside since 2015.

Kelleher had absolutely no chanceAFP

It paid dividends when the irrepressible N’Golo Kante released Pulisic and he side-footed a left-footed volley into the top corner.

The frantic pace remained into the second half, with Mane forcing a smart save from Mendy yet again after great work down the left hand side.

Klopp may have been watching from home, yet his presence was looming as he chucked on Naby Keita and Alex Oxlade-Chamberlain in the hope of finding a winner.

Yet the dynamic duo of Kante and Kovacic held firm in midfield and a draw was perhaps a fair result to conclude a remarkable game of football. With both sides chasing Manchester City at the top, perhaps they are the real winners from a superb Sunday at Stamford Bridge.

Inside the Russian takeover of Belarus: Elsewhere in emerging Europe