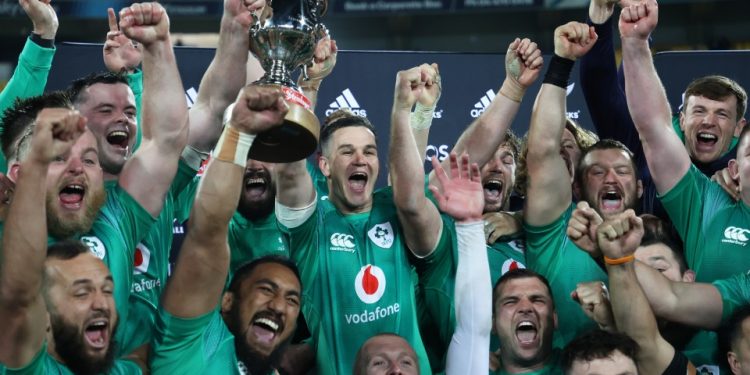 Ireland made history in New Zealand as they secured a stunning 32-22 win in Wellington to complete a 2-1 series win.

The epic triumph sparked tears and cheers from from the players who lapped up every moment of the historic occasion.

Bundee Aki loved every minute of the celebrationsGetty

The Boys in Green had only won away to New Zealand for the first time last weekend.

They bounced back from a 42-19 drubbing in the Auckland opener to triumph 23-12 in Dunedin and set up the decider.

And the clash in Wellington couldn’t have started any better with Andy Farrell’s men led by 19 points at the break courtesy of a spellbinding display which brought tries for Josh Van Der Flier, Hugo Keenan and Robbie Henshaw.

But the All Blacks moved to within three points in a breathless second period thanks to scores from Ardie Savea, Akira Ioane and Will Jordan, before Rob Herring crossed to help the tourists home on a historic evening.

Members of Ireland’s triumphant squad were pictured in tears at full-time as they savoured arguably the greatest result in their nation’s history.

Captain Johnny Sexton, who celebrated his 37th birthday on Monday, chipped in with 12 points, becoming the second man to surpass 1,000 in the green jersey.

Herring touched down for IrelandGetty

Head coach Farrell had expressed hope that his side had saved their best performance for the final Test.

The Englishman duly had his wished granted during a phenomenal opening 40 minutes packed with power and intensity before the Irish weathered a second-half storm, intensified by the loss of prop Andrew Porter to a yellow card, to take the series 2-1.

“This is a special group,” he told Sky Sports. “This is probably the toughest thing to do in world rugby.

Ireland fans will be partying in New ZealandGetty

“We dusted ourselves down and we came over here with task in hand and we went for it straight from the start, which is great.

“We said it was going to be the start of our World Cup year but, I don’t know, it’s probably a little bit bigger than that.”

And with Ireland now top of the rankings, confidence is high and Farrell feels they reckon they can beat anyone in the world.

“They already do believe that because they keep turning up and surprising me, certainly,” he said.

“The bunch are just tight. They knew there was a better performance in them (following the first two Tests) and there certainly was for that first 40 (minutes).

“These guys have won a lot of stuff and broken some records – this one will top it, I would have thought.”

Tax on the poor. Romania has the highest taxes on minimum wage in the EU