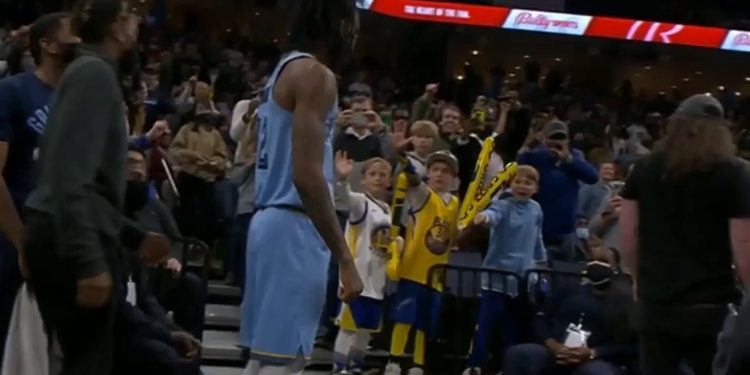 Ja Morant and the Memphis Grizzlies are scorching hot right now, as the team is in the midst of a 10-game winning streak. The team picked up one of its most impressive wins of the season on Tuesday night, withstanding haymaker after haymaker from the Golden State Warriors en route to a 116-108 victory.

The game happened in Memphis, and the fans at FedExForum were raucous in support of their team all evening. But of course, the Warriors have fans all over, and a few of them drew attention for a moment involving Morant in the fourth quarter. Basically, some children were in Dubs jerseys and wanted the future All-Star guard to dap them up following his late bucket to seal a win, only Morant was so locked in that he refused to do it.

Morant staring down children for wearing Warriors jerseys in his own building is pretty funny, and after the game, he explained what was going on here while also making clear that he’s willing to hook them up with gear for the home team.

gotta get the kid a @JaMorant jersey

“It was disrespectful to have that jersey on,” Morant said, saying that there’s no mercy for anyone, even kids, who wear gear for the opposing team during games. “We in Memphis. It looked like he wanted to cheer but he had that jersey on. I apologized to him, but in that moment, bro, take that jersey off and dap me up.”

Congrats to the child in question on the new Grizzlies gear and for being the most popular kid at school for a few days.