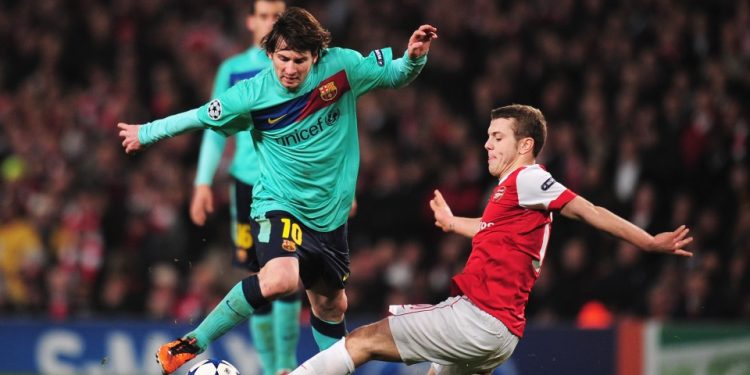 Jack Wilshere has named Lionel Messi above Cristiano Ronaldo and Steven Gerrard ahead of Frank Lampard whilst choosing between some of the game’s greats.

The former Arsenal midfielder, who also co-hosts on talkSPORT, played alongside, and against, some of the very best during his time at the Emirates.

He also played alongside some of the best at ArsenalGETTY

Excelling in the Champions League, Premier League and on the international stage, Wilshere has been able to cast an eye over some of the game’s modern greats, watching on from the centre of the park.

And with that in mind, talkSPORT sat down with the 29-year-old for a round of ‘Either/Or’ where he had to choose between pairs of footballing legends.

Not just two of the games modern greats, but unquestionably two of the best to ever play the game, opinion has been split on Messi and Ronaldo since they started sparring in LaLiga back in 2009.

Wilshere famously had one of his greatest nights when he picked up a man of the match award against Barcelona as a teenager in 2011, and still rates Messi as a level above.

“Messi for me, I’ve always been team Messi,” Wilshere said. “Obviously I love Ronaldo and respect what he’s done – to be honest with you he came close to changing my mind – but I just love watching Messi play.”

After his performance against Barca, Wilshere was compared to legendary Spanish midfielders Xavi Hernandez and Andres Iniesta, and also offered his opinion on who was better.

He said: “I think Xavi. The way I look at it, if Xavi didn’t play Iniesta still would have been good but he wouldn’t have been the same player, but if Iniesta didn’t play…

“Xavi, Xavi was like the one in the team who carried the team, he started the attacks and was always an option and he never gave the ball up.”

Revered as much as the Spanish duo, Gerrard and Lampard had just as storied careers, but spectacularly failed to create a similar partnership on the international stage.

Debates often rage between Liverpool and Chelsea fans over who was best, and Wilshere is in the red corner.

“I’ve been asked this one a lot,” he explained. “I’ve played with both and they were both amazing, probably two of the best English players I’ve played with.

“But I’m going to have to go Gerrard. He nicks it in the early days where he first burst onto the scene and he was that dynamic goal scoring midfielder, but Lampard’s numbers were incredible.”

Another debate that is now emerging when it comes to the Three Lions is between talismanic strikers Wayne Rooney and Harry Kane.

England captain Kane has taken England further than Rooney in tournaments, and looks set to beat his goal record, but the Manchester United legend still wins out for Wilshere.

He explained: “I think Rooney because of the trophies he won, Champions League, Premier League, obviously England’s record scorer, Harry might and probably will beat that but Rooney for me.”

Wilshere also had his say on a number of Arsenal greats listing Cesc Fabregas ahead of Patrick Vieira, and Santi Cazorla over Mesut Ozil.

The headline, though, will be his pick of Thierry Henry over former Brazil striker Ronaldo – widely considered the best ever in his position.

“Thierry Henry because I got to see him live,” Wilshere said.

“I saw him in training and the things he could do were incredible, Ronaldo and him are probably the best two strikers of all time so it’s difficult but I’m going Henry.”

Many believe Ronaldo could have been the greatest without injuriesAFP – Getty

The question Wilshere found most difficult of all though was choosing between two Arsenal strikers that he both played with.

Robin van Persie was the Gunners’ driving force up front between 2012 and 2015, but Alexis Sanchez soon took over the burden and won Wilshere’s heart.

“This is the toughest one because they were both unbelievable,” he said. “I’m probably going to have to say Alexi because I played with him for longer.

Now a bit-part player at Inter, Sanchez was unstoppable at times for Arsenalgetty

“As good as Robin was, he didn’t have the pace of Alexi, he was that one player who didn’t give us much defensively but it didn’t really matter because we trusted him when he got the ball because he could beat someone and win the game for us.”

Taking things back to today’s game, Wilshere named Raheem Sterling over Jack Grealish, and was asked to pick between Liverpool’s Mohamed Salah and PSG’s Neymar.

“The type of goals he scores, the way he runs at defenders, his consistency as well over the last couple of years has been scary and I think he deserves that credit at the minute.”