Jake Paul vs Tyron Woodley rematch PPV claimed to have ‘bombed with less than 65,000 buys’ as Jorge Masvidal says he ‘never again’ wants to be linked to fighting YouTuber 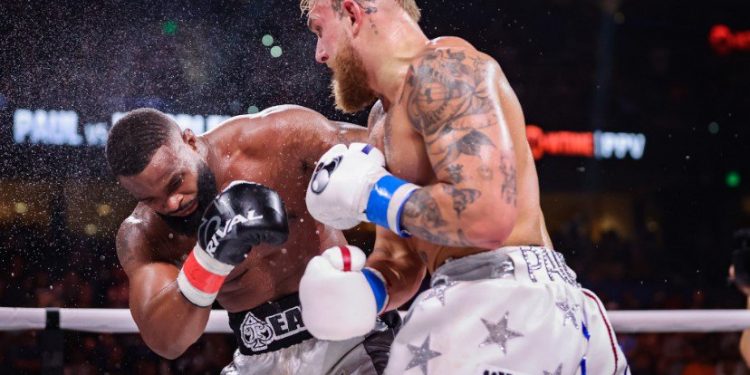 The YouTuber-turned-boxer knocked out the former UFC welterweight champion in their rematch on 18 December.

Jake Paul KO’d Woodley in their rematch fight in DecemberShowtime

While numbers are rarely officially released, an idea of the number of people who tuned in has been reported by DAZN journalist Steven Muehlhausen.

He tweeted: “Sources: Have learned that Jake Paul vs. Tyron Woodley 2 “bombed” on cable/satelitte PPV.

“Numbers are below November’s [professional wrestling] #AEW Full Gear which did under 65,000 buys on terrestrial TV. Streaming numbers are unknown.”

Sources: Have learned that Jake Paul vs. Tyron Woodley 2 “bombed” on cable/satelitte PPV. Numbers are below November’s #AEW Full Gear which did under 65,000 buys on terrestrial TV. Streaming numbers are unknown. #boxing

The 24-year-old had been due to fight Tommy Fury, but the British boxer pulled out through illness and injury.

Instead of cancelling the event, Paul decided to give Woodley a rematch – and swiftly knocked him out.

Paul has called out the likes of Masvidal after beating WoodleyGetty

These numbers do not take into account streaming figures, while it was also the sixth combat sports PPV event in the last six weeks.

Paul, though, labelled the reports ‘bulls***’.

“First fight with Woodley we sold $500k plus,” he wrote on Twitter. “Numbers for this one are still rolling in but still looking positive. Not my best business night. But remember, everyone wanted to see me vs Fury and that’s what we sold.

“Shout out to [broadcaster] Showtime for riding with me and all the fighters on the card and Tyron for not being a b**** like most of these ‘fighters’ are.”

Paul had claimed he has offered current UFC star Jorge Masvidal $5million (£3.73m) to step into the ring with him, but ‘Gamebred’ issued a warning for using his name in future.

Pointing out the reported figures and tweeting a picture of Paul, Masvidal wrote: “B**** boy can’t afford the big boys Never again do I want to hear my name associated with the fake. 3 0 5 day is coming.”

Beware Tory plans to sell off the NHS