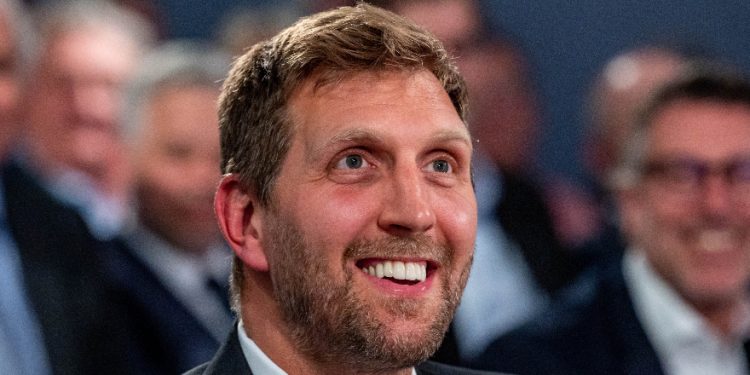 Dirk Nowitzki was honored on Wednesday night in Dallas with his jersey retirement ceremony following a 99-82 Mavs win over the Warriors, as the future Hall of Famer saw his No. 41 go into the rafters, with many of his former teammates coming together for the occasion to honor him.

Among them is current Mavs head coach Jason Kidd, who donned a Nowitzki jersey after the game to give a speech about Dirk, and while he eventually got to talking about Nowitzki’s work ethic, what he meant to the franchise and the league, and thanking him for that 2011 title, he had to shoot his shot with an offer to come back.

just in case you were curious pic.twitter.com/GaRXWhSgtP

“We’re giving out 10-days, you want to come back?” is a tremendous line and Kidd delivers it with such a straight face you know he’s just a little bit serious about it. Dirk, wisely, will not be trying to make an appearance in a 22nd season, as he’s living his best life in retirement, but if Joe Johnson can come back and Lance Stephenson can have a 20-point quarter in Indiana again, it was worth a shot from Kidd.

Beyond (kind of) joking about bringing Dirk back, the Mavs also unveiled the statue they’ll put out front of the American Airlines Center, with Nowitzki shooting his signature leg-up fadeaway.

It’s an interesting concept for a statue, particularly with the three basketballs to mimic the shot, and we’ll have to see how it looks once its full-size rather than model size.

Russian gas or defence of Ukraine? UK PM says Europe can’t have it both ways