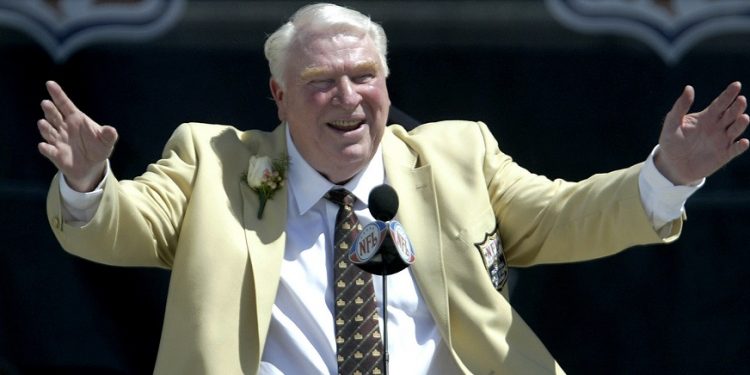 Madden is a staple of the video game calendar. It’s the rare game that transcends its target audience — it’s not just a huge football game or even a huge sports game, it’s routinely one of the biggest video game releases every single year. Without fail, people will buy the new Madden for roster updates and they’ll sink hundreds of hours into it until the next one. When a new console comes out, some gamers purchase it solely because they want to continue playing the newest Madden. It boasts one of the most consistent fanbases in all of gaming.

None of this would have happened if not for John Madden. The legendary football coach and broadcaster, who passed away at 85 earlier this week, had a huge influence on the franchise in many different ways — the biggest one obviously being that he was willing to put his name and face on the game. When EA first began formulating Madden, licensed sports games were still in their infancy. Games rarely featured real team logos, rosters full of actual players, or real life broadcast crews. They usually involved nameless pixels and maybe one or two real people with whom the publisher reached a licensing agreement.

EA had the idea to put big names on the cover of games and create interest through recognizable faces. One on One: Dr. J vs. Larry Bird served as something of a proof of concept in 1983. Then, in 1988, they released John Madden Football, thereby starting one of the most successful video game franchises ever.

But to make a successful football game, you couldn’t just have a recognizable face on the cover. By bringing in Madden, EA struck a partnership with someone who was fully invested in making the project as good as possible — he famously gave the team his full playbook from his coaching days.

EA also had its biggest critic. Madden wasn’t just going to let someone slap his name on something he didn’t approve of, so the game had to be as close to realistic football as they could get at the time. This famously meant the game had to be 11-on-11 with actual plays and an experience that felt like watching a game of football. While Madden wouldn’t get that final wish until much later, the game featured realistic elements such as injuries, player fatigue, and penalties.

Madden’s demands created a franchise baseline that it would follow from there on out. These games placed an emphasis on being realistic and creating the feeling of watching football. Considering one of Madden’s original hopes was to make the franchise a teaching tool for those who wanted to learn more about the sport, it makes sense why he was so uncompromising in this regard. Madden would go on to do just that, as its namesake proudly stated in a 2012 interview with Grantland, “It’s a way for people to learn the game and participate in the game at a pretty sophisticated level.”

Madden would go on to become one of the most influential sports games of all time. When John Madden Football was released in 1988, it didn’t feature any actual teams or logos. By 1990, the games were being released yearly, and by 1993, once EA acquired licensing for teams and players, it became the Madden NFL franchise.

The series played a major role in creating a giant in the gaming industry in EA Sports. Every game they made was going to use the Madden series as the model. Lakers versus Celtics and the NBA Playoffs would go on to become the NBA Live franchise. Bill Walsh College Football would eventually become NCAA Football, NHL Hockey became the long-running NHL series, and FIFA International Soccer would turn into the extremely lucrative FIFA franchise. Every single one of these games made it a point to create a presentation that felt like watching a television broadcast.

These days, sports games have emphasized being realistic over most everything else. The arcade sports game, which dominated the genre in the ’80s, is rarely a priority for developers. Why? Because everyone wanted to copy the model laid out by EA Sports. While people certainly have issues with some elements of how sports games exist today, and those gripes are very much understandable, we also can’t say that NBA 2K or MLB: The Show would be what they are today without the model that Madden laid out.

Obviously, the Madden franchise would change, and eventually, Madden’s role in it would decrease. He moved away from the box art in 2001, with players now donning the cover exclusively. He started to phase out his role in the commentary booth in Madden NFL 09, as he only appeared in the Wii, PS2, Xbox, and PSP versions. Despite this, he never stopped promoting and talking about the game, because in many ways it was as much his creation as it was everyone at EA.

Not only was John Madden a legendary football coach and TV broadcaster, but he is high on the list of people who are responsible for what sports games look like today. Without him, the entire industry just wouldn’t look the same.

Leicester vs Liverpool betting offer: Get Leicester to win at 50/1 OR Liverpool at 6/1 with 888Sport new customer special