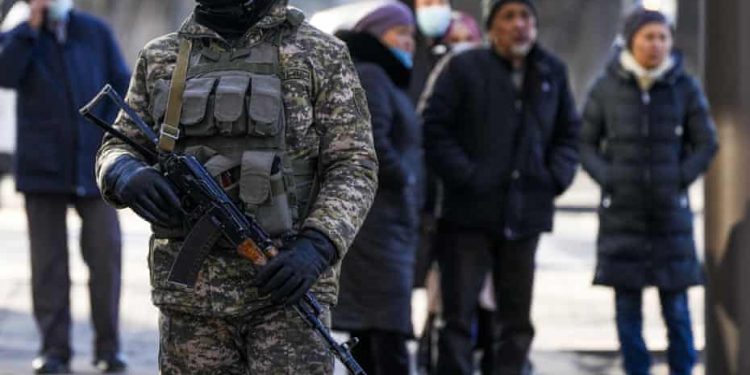 The violent unrest in Kazakhstan that began with peaceful protests in early January has left 225 people dead, authorities have said in a dramatic increase on previous tolls.

“During the state of emergency, the bodies of 225 people were delivered to morgues, of which 19 were law enforcement officers and military personnel,” Serik Shalabayev, the head of criminal prosecution at the prosecutor’s office, told a briefing on Saturday.

Others were “armed bandits who participated in terrorist attacks”, Shalabayev added. “Unfortunately, civilians have also become victims of acts of terrorism.”

The unprecedented clashes between security forces and anti-government protesters in the energy-rich ex-Soviet state prompted the president, Kassym-Jomart Tokayev, to declare a state of emergency and call in help from a Russian-led military bloc.

Shalabayev said 50,000 people joined the riots throughout the country at their peak on 5 January, when crowds stormed and torched government buildings, cars, banks and shops in several major cities.

Kazakhstan had previously acknowledged fewer than 50 fatalities – 26 “armed criminals” and 18 security officers – from a conflict that exposed infighting at the top of the government. A higher death toll of 164 appeared on an official Telegram channel last week but was quickly retracted.

Asel Artakshinova, a spokeswoman for the health ministry, said that more than 2,600 people had sought treatment at hospitals, with 67 remaining in a serious condition.

Authorities in Kazakhstan have blamed the violence on bandits and international “terrorists” who they said hijacked the protests that saw the epicentre of unrest move from the west to the country’s largest city, Almaty. They have not provided evidence about who the alleged foreign bandits and terrorists were.

The protests have been the biggest threat so far to the regime established by Kazakhstan’s founding president, Nursultan Nazarbayev, who stepped down in 2019 and handpicked Tokayev as his successor.

Much of the popular anger has appeared directed at Nazarbayev, who is 81 and had ruled Kazakhstan since 1989 before handing over power.

Tokayev this week launched an unprecedented attack on Nazarbayev, saying his mentor had failed to share the country’s vast wealth with ordinary Kazakhs.

On Saturday, the sovereign wealth fund Samruk-Kazyna said two of Nazarbayev’s relatives, Dimash Dosanov and Kairat Sharipbayev, had lost their jobs at the helm of energy companies.

The moves were made “in accordance with the decision of the board of directors”, the fund said.

Sharipbayev, 58, is widely believed to be the husband of Nazarbayev’s oldest daughter, Dariga Nazarbayeva. He was in charge of the national gas company QazaqGaz, formerly KazTransGas.

Dosanov, 40, is the husband of Nazarbayev’s youngest daughter, Aliya Nazarbayeva, 41, and was the head of the national oil transporter KazTransOil.

Tokayev has in part blamed QazaqGaz for the historic crisis, which started with a spike in prices for liquified petroleum gas, a popular fuel, sparking the peaceful protests at the start of January.

Nazarbayev has three daughters. Middle daughter Dinara Kulibayeva’s husband, Timur Kulibayev, is viewed as one of the country’s richest men with extensive interests in the energy sector. Together the pair control Kazakhstan’s largest commercial bank, Halyk.

With Agence France-Presse and Reuters