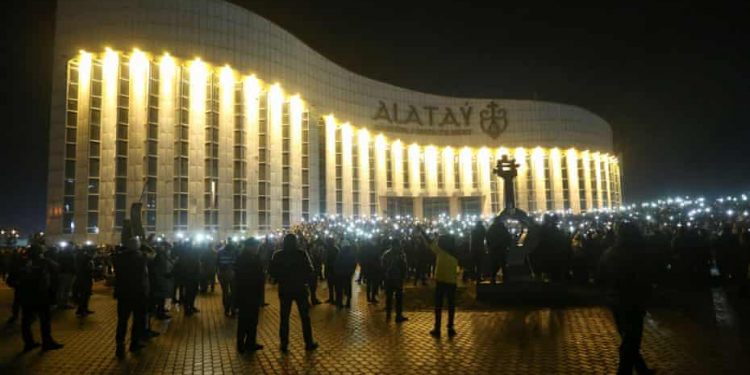 Kazakhstan’s president has declared a state of emergency in large parts of the country, as authorities struggled to respond to a rare outbreak of unrest.

Sparked by rising fuel prices, protests began in the west of the country over the weekend and have spread quickly.

Police used stun grenades and teargas after crowds refused to disperse, AFP reported, estimating there were more than 5,000 people present. Later, there were unverified reports of police cars on fire in Almaty, and videos from a number of other cities appeared to show protesters braving subzero temperatures and a large presence of security forces.

Mobile internet was down and messaging apps were blocked across large parts of the authoritarian Central Asian nation.

“All calls to storm or attack government buildings are absolutely illegal,” the president, Kassym-Jomart Tokayev, said in a video address on Tuesday evening.

In a tweet, Tokayev blamed the protests on “destructive individuals who want to undermine the stability and unity of our society”. In an attempt to quell the unrest, however, he said the government would meet on Wednesday to discuss “the socio-economic demands” of protesters.

Late on Wednesday, he imposed a state of emergency covering Almaty and the western Mangystau province, which is due to last for two weeks.

The protests began over the weekend in the oil city of Zhanaozen, the same place where, in December 2011, police fired on protesters killing at least 16 people.

The initial spark for outrage was the sharply rising price of liquefied petroleum gas (LPG), used by many to power their cars, particularly in the west of Kazakhstan. The price doubled in a matter of days.

Tokayev said the government would introduce a price cap of 50 tenge (about 8p) a litre on LPG, roughly half the current market price, in Mangystau province.

However, the protests have taken on a more political hue in some places, with a release of pent-up frustration about a lack of government accountability in the authoritarian country.

Tokayev is the handpicked successor of Nursultan Nazarbayev, a Soviet-era Communist boss who became Kazakhstan’s first leader after independence and ruled for nearly three decades until he stepped down in 2019. The 81-year-old still wields enormous power behind the scenes, and the country’s capital city was renamed Nur-Sultan in his honour in 2019.

Under Nazarbayev and his successor, a small elite have amassed enormous wealth, while life for many ordinary Kazakhs is still hard-going, particularly in the resource-rich west of the country. Rare protests have been ruthlessly crushed, and the regime faces no real opposition in parliament.