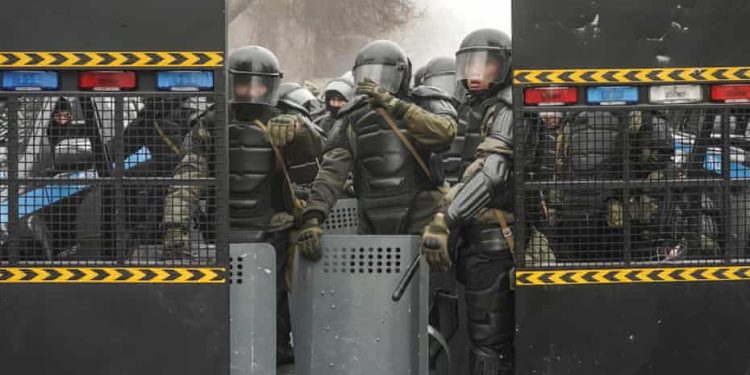 Kazakhstan’s president has threatened to crack down ruthlessly on protests ongoing across the country, claiming the unrest has led to deaths and injuries among law enforcement officers.

“As the head of state … I plan to act as toughly as possible,” said Kassym-Jomart Tokayev in a televised address on Wednesday afternoon. “This is a question of the safety of our country. I am certain that the people will support me,” he added, saying he had no plans to flee the country’s capital.

Earlier on Wednesday, Tokayev accepted the resignation of the government and introduced a state of emergency in several provinces in an attempt to claw back control over the situation, but the moves failed to deter angry crowds.

The protests began in the west of the country at the weekend, after a sharp rise in fuel prices, but have spread quickly and taken Kazakhstan’s authorities and international observers by surprise.

In Almaty, the country’s commercial capital and largest city, there were violent clashes between police and demonstrators and the mayoralty was set on fire, with smoke and flames visible from several floors of the imposing building.

In other cities, including Aktobe in the west of the country, crowds tried to storm government buildings. There were reports and videos of police cars set on fire and security vehicles seized by the crowd.

“The authorities are trying everything to calm things down, with a mix of promises and threats, but so far it’s not working,” said Dosym Satpayev, an Almaty-based political analyst. “There will be imitations of dialogue but essentially the regime will respond with force, because they have no other tools.”

Tokayev has blamed the protests on “destructive individuals who want to undermine the stability and unity of our society”.

At times, authorities have shut down mobile internet and blocked access to messaging apps, and on Wednesday afternoon the internet went down across much of the country. Authorities said army units had been brought into Almaty to restore order.

Images of police being overpowered by protesters are likely to cause alarm in the Kremlin, as another country neighbouring Russia succumbs to political unrest. Kazakhstan is part of an economic union with Russia and the two countries share a long border.

“We hope for the earliest possible normalisation of the situation in the country, with which Russia is linked by relations of strategic partnership and alliance through fraternal, human contacts,” said the Russian foreign ministry in a statement. Dmitry Peskov, spokesperson for Vladimir Putin, said it was important no foreign countries interfered in Kazakhstan.

The trigger for protests was a sharp rise in the price of liquefied petroleum gas (LPG), used by many to power their cars, particularly in the west of Kazakhstan. They began over the weekend in the oil city of Zhanaozen, where in December 2011 police fired on protesters, killing at least 16 people.

It soon became clear that the anger was not narrowly focused on LPG prices, and a government announcement that the price would be fixed at a lower level has done nothing to quell the protest.

Instead, there is broader discontent with Tokayev, president since 2019, and his 81-year-old benefactor, Nursultan Nazarbayev. A former Soviet-era communist boss who became Kazakhstan’s first president after independence in 1991 and ruled until 2019, Nazarbayev still wields immense power behind the scenes. During his rule over the resource-rich country, a small elite has become fantastically wealthy while many ordinary Kazakhs live in poverty.

“Nazarbayev and his family have monopolised all sectors, from banking to roads to gas. These protests are about corruption,” said 55-year-old Zauresh Shekenova, who has been protesting in Zhanaozen since Sunday.

“It all started with the increase in gas prices but the real cause of the protests is poor living conditions of people, high prices, joblessness, corruption,” she added.

Tokayev declared a state of emergency in large parts of the country overnight, but this did not stop crowds gathering on Wednesday.

Darkhan Sharipov, an activist from the civil society movement Wake Up, Kazakhstan, said a group of about 70 activists had set off to march to the centre of Almaty on Tuesday night, but many of them were detained and held at a police station for several hours.

“People are sick of corruption and nepotism, and the authorities don’t listen to people … We want President Tokayev to carry out real political reforms, or to go away and hold fair elections,” he said.

While it is clear there is widespread discontent in the country, the cleansing of the political playing field over many years means there are no high-profile opposition figures around which a protest movement could unite. Instead, the protests appear largely directionless.

“There are some local figures, but nobody who could unify forces across the country, though with time they could appear,” said Satpayev.

The five former Soviet Central Asian republics have been largely devoid of protest in their three decades of independence, with the exception of Kyrgyzstan, which has had several revolutions. The other four have been ruled by autocrats who have ruthlessly cracked down on any sign of protest. Nazarbayev was once considered the most canny of these rulers and was widely popular, but over time the lack of economic progress or political reform has led to rising discontent.

Sustainability is not a trend: it’s a must

Are Portions of Washington State in Severe Drought?