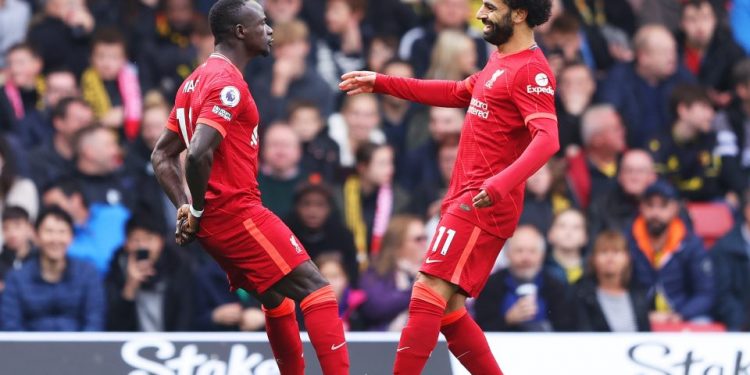 Kelechi Iheanacho has called on all players from participating teams at this year’s Africa Cup of Nations to show the rest of the world how great football on the continent is.

The build-up to the tournament, which kicks off on January 9, will see a number of teams in the Premier League and other top European leagues lose key players in the middle of the domestic season.

Liverpool are likely to feel the effects of AFCON, with Sadio Mane and Mohamed Salah set to represent Senegal and Egypt respectivelyGetty

It’s led to some questions about whether players will carry on playing for their club instead of their country with Watford star Emmanuel Dennis a reported doubt to represent Nigeria at the tournament.

The questions African players are being asked haven’t sat well with Arsenal legend Ian Wright, who believes the nature of the questioning is ‘completely tinged in racism.’

“Is there ever a tournament more disrespected than the Africa Cup of Nations?” Wright said on Instagram.

Wright has earned praise for these comments, including from Cameroon icon Samuel Eto’oInstagram @wrightyofficial

On the media coverage around AFCON, he added: “There is no greater honour than representing your country. The coverage is completely tinged with racism.

“We played our Euros [Euro 2020] across ten countries in the middle of a pandemic and there’s no issue at all. But Cameroon, a single country hosting a tournament, is a problem.

“There are players getting asked if they will be honouring the call-ups to their national teams. Imagine if that was an England player representing the Three Lions. Can you imagine the furore?”

Iheanacho, who’s due to represent Nigeria in Cameroon, believes this is an opportunity for all the nations to show the world what they can do.

Iheanacho has 38 caps for Nigeria, who made the semi-finals of the last AFCON in 2019Getty

He told talkSPORT: “We need to keep doing what we’re doing and do our best and keep showing the world that Africa deserves more and there are more opportunities for good footballers over there.

“Our competition needs to be looked at as well but I think we need to prove with our play that our competition is underrated by doing extraordinary things on the pitch, by scoring goals, by performing really well so when we do that it will speak for itself.”

But Simon Jordan challenged Wright’s claims and insisted these questions are merely being asked as AFCON 2021 is taking place in the middle of the domestic season and not in the summer.

He said on White and Jordan: “Racism is a subject that needs to be attended to and when racism occurs it needs to be dealt with and needs to be squashed and most sane-minded people would want to see that and see that manifest itself.

“When you start hearing people like Ian Wright make overtures and observations about tournaments being tinged or people’s responses to players going away to play in a tournament that lands in the middle of a season – you’re not comparing and contrasting properly, Ian.

“You’re trying to make a point on a very sensitive subject and what you do when making points like that is you discredit the idea of racism where it legitimately exists and needs to be removed.

“A tournament played in the middle of a season, compare it to the European Championship in the summer, when players aren’t being demanded things from their domestic paymasters.

“Compare the World Cup [in 2022] – okay we know it’s in November but the season is being curtailed. If the Africa Cup of Nations want to get into negotiations with the Premier League and the leagues around the globe to be able to curtail their leagues they can have that conversation.”

Interview. Irina Rosu (World Class): We plan to continue the expansion of the network in Romania next year