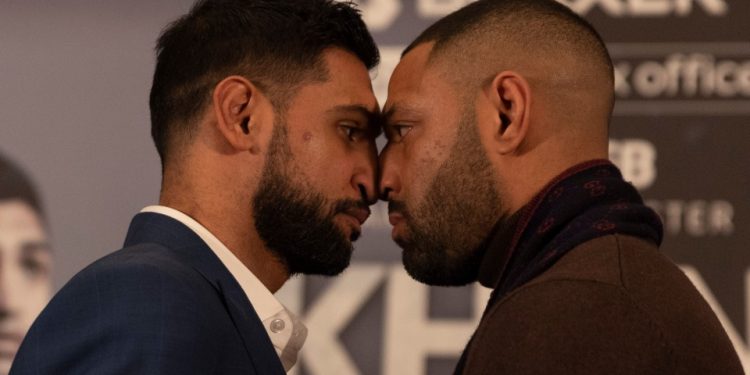 Kell Brook has one eye on Conor Benn if he can get past British rival Amir Khan in 2022, but admits he would consider quitting the sport if he loses to his foe.

‘Special K’ has waited almost a decade but he is tantalisingly close to finally getting his hands on Khan on February 19 in Manchester.

Khan and Brook will finally fight on Feb 19BOXXER/LAWRENCE LUSTIG

The former IBF world welterweight champion may have lost his way since consecutive defeats to Gennady Golovkin and Errol Spence, yet the rivalry has captured the imagination of the British public.

Tickets for the event sold out in ten minutes, making it the quickest-selling fight in British history.

The 147lbs division is burgeoning with talent in the UK, with the likes of Josh Kelly and now Benn leading the charge.

Following Benn’s emphatic stoppage of Chris Algieri in December, Brook admits he already has started to plan for what’s next after he takes care of Khan.

“I think my mojo is back, I’m feeling fantastic and I’m enjoying training,” Brook told White and Jordan.

“Obviously everybody and their dog is talking about it and I’m just excited. I know that Conor Benn is banging the drum for some big fights.

“This is why I love the sport; I love the challenge, he looked fantastic – sensational – in his last fight against Chris Algieri.

“We’ve sparred together and we are very good friends as well, but obviously this is a sport and it’s about going out there to the boxing fans who pay and watch that I believe that I’m the best.

“I believe that it would be a fantastic match-up, me and Benn.”

However, should he suffer a loss to rival Khan, it could well signal the end of the line for the Sheffield-born fan favourite.

“But if we have to bring that up and, even though I can’t get that in my head that I am going to lose, but I would call it a draw.

Bird flu outbreak in Israel kills 5,000 cranes and sparks slaughter of half a million chickens