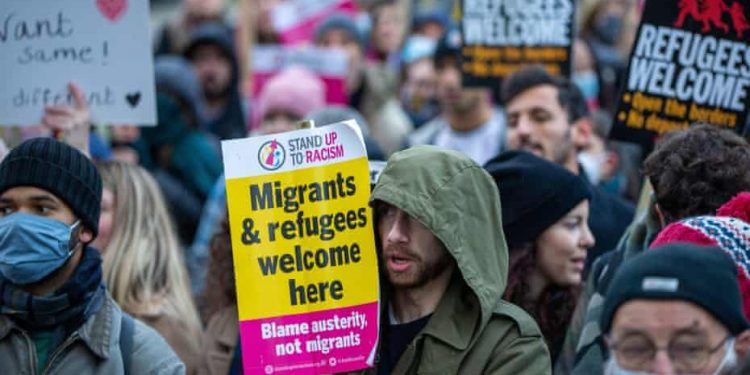 Surviving members of the Kindertransport have urged the government to reopen safe routes for refugees in Europe, especially children, trying to reach the UK or risk more tragedies occurring in the Channel.

Alf Dubs, Stephanie Shirley and Erich Reich, who all arrived in the UK between 1938 and 1939 as child refugees on the Kindertransport, an initiative set up to rescue nearly 10,000 Jewish child refugees before the second world war, said the UK was losing its moral authority in the world and urged the government to change tack.

Their warning comes amid deepening calls for a public inquiry into the deaths of 27 refugees who drowned in the Channel last month, after lawyers representing bereaved family members said “serious failings” in the rescue operation may have contributed to their deaths.

“We warned this would happen and that the policies the government has been following was going to lead to this happening,” Lord Dubs said. “We shouldn’t allow this to happen. We should do the right thing. And the right thing is to have safe and legal routes for people to find safety. Not every refugee in the world, but certainly those that have some connection with Britain.

“That’s what was the position before we left the EU and it’s really a tragedy that we’ve gone backwards in this regard.”

In 2016, the government accepted an amendment by Dubs to resettle 3,000 child refugees. Once the scheme ended in 2020, only 480 unaccompanied asylum-seeking children from Europe were resettled.

After the UK left the EU, Dubs put in another amendment, which would require the government to negotiate an agreement with the EU to ensure that unaccompanied children in Europe could continue to come to the UK to join a family member after Brexit, but it was rejected, he said.

“They’re closing down legal routes to safety and I find that shocking,” he said. “We’re pushing asylum seekers into the sea … We’re just doing the same as what is happening tragically in parts of the Mediterranean.”

Dame Stephanie pointed to a recent survey by Safe Passage, which campaigns for safe legal routes for refugees seeking protection, that showed more than half the children the charity was supporting had lost faith in the legal process.

“I’m so proud of this country. I love it passionately, but we’ve lost our moral leadership in the world,” she said. “We’ve got something like 11,000 children stuck somewhere on the streets of Calais, or in refugee camps [in Europe]. It’s not a safe place for children. Every day 17 go missing, and that means that they’ve been killed or exploited or have been trafficked. These are figures that are very difficult to accept in any civilised society.”

Reich, who is the chair of Kindertransport group at the Association of Jewish Refugees, said he was upset when he saw the news of the record number of refugees dying crossing the Channel. He believes, as a minimum, the government must announce an ambitious directive that resettles child refugees in Europe with a connection to the UK.

“I think it was our 70th anniversary of the Kindertransport that Prince Charles came and gave a short speech. But what he said was very interesting. He said: ‘I’m so glad that the government of the time allowed you in, because you have given back so much to this country.’ And that’s what it’s all about,” he said.

He added that the government’s anti-immigrant policies were “a great source of anguish for me”.

A Home Office spokesperson said: “The UK has always provided sanctuary for those fleeing persecution, oppression or tyranny and in 2020, we received the second highest number of asylum applications from UASC out of all European countries.”

Under current immigration rules, unaccompanied asylum-seeking children in Europe with family members in the UK can apply to join eligible sponsors.

The spokesperson added: “However, opportunities to claim UK asylum from within Europe only incentivise people into making treacherous journeys. That is why the New Plan for Immigration will enable the world’s most vulnerable to come to the UK through safe and legal routes, while making it more difficult for people to enter the UK illegally and stay.”