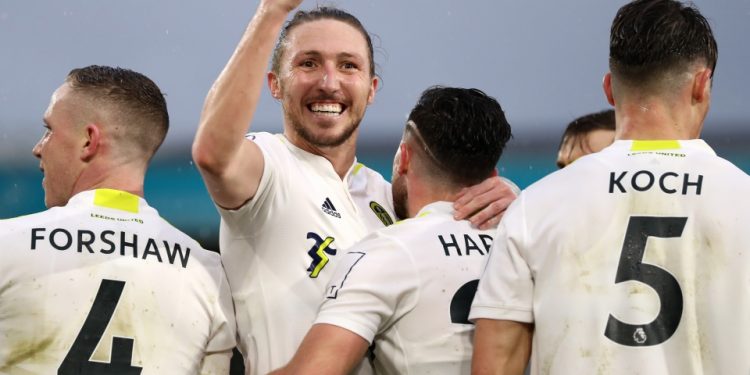 Leeds United beat Burnley 3-1 at Elland Road but the win was marred by a fan striking Matt Lowton with a thrown bottle.

The right-back was celebrating the Clarets’ equaliser with his teammates before being hit by the object.

It was a nervy affair between two sides desperate for three points but it was the hosts who broke the deadlock late on in the first half thanks to Jack Harrison.

The winger capitalised on a mistake from James Tarkowksi before running at him.

After quick feet from Harrison, he got a shot away which was parried by Wayne Hennessey but the winger reacted quickly to slot in at the near post.

It was a massive goal for Marcelo Bielsa who desperately needed the points given the current predicament of the club.

Harrison did very well to even produce a scoring opportunity, let alone finding the netGetty

Burnley responded in the second half thanks to a stunning free-kick from summer signing Maxwel Cornet.

The Ivory Coast winger bent the ball beautifully around the Leeds wall and past goalkeeper Illan Meslier.

As he and his teammates celebrated in the corner where Leeds fans were situated, some of the supporters felt the need to throw objects at the players with one bottle striking Lowton.

It was an unsavoury scene and one that could see repercussions.

Sadly though, Lowton and his team mates were targeted by some of the Leeds fansGetty

As the match progressed both sides were looking to get in front and it would be the home side who would take the lead thanks to Stuart Dallas.

The Northern Irishman curled in a wonderful effort from 20 yards after the hosts worked a short corner.

The day would get even better for Bielsa after Dan James got on the end of a Joe Gelhardt cross to head past Hennessey and secure a huge win for the Yorkshire side.

The result puts them eight points clear of 18th placed Burnley who will desperately need to get maximum points from their two games in hand.

A Global Upturn in Economic Conditions and Investment in Infrastructure

Simon Jordan told to apologise to Jack Grealish for ‘moron’ outburst, but refuses to back down and adds that Man City teammate Phil Foden is a ‘twit’ over night out which saw both stars dropped