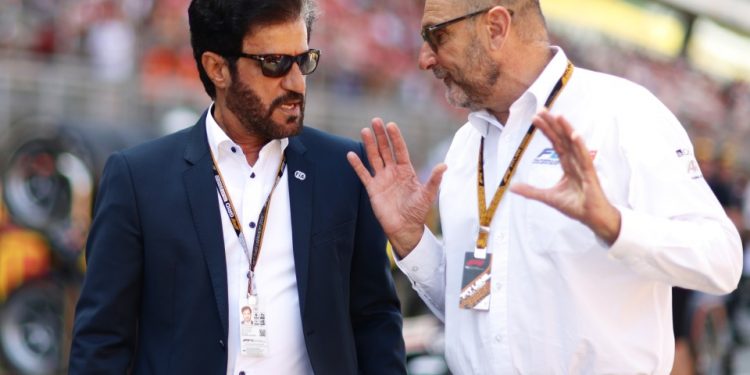 Formula 1 stars Lewis Hamilton, Sebastian Vettel and Lando Norris have hit back after the president of the FIA said there is ‘no way’ he would impose his beliefs on other people.

Mohammed ben Sulayem, who replaced long serving president Jean Todt ahead of this season, namechecked the trio in reference to their public statements.

The former rally driver has come under fire for his commentsGetty

Hamilton and others were surprised by the perceived criticismAFP

Seven-time champion Hamilton has been a regular proponent of human rights and diversity during his career, with he and Mercedes teammate George Russel opting to put rainbow logos on their cars this month in support of the LGBTQ community.

Aston Martin’s four-time champion, Vettel, recently appeared on British political show Question Time as he expressed his concerns about climate change, and has since featured on the front cover of Attitude, Europe’s best-selling gay magazine.

Elsewhere McLaren’s British star Norris has been a regular proponent of better mental health, talking through his own struggles, with his team now sponsored by the charity Mind.

Bin Sulayem was asked about drivers using their influence, and said while everyone has the ‘right to think’ there is no way he would impose his beliefs on others.

Referencing former world champions, he said: “Niki Lauda and Alain Prost only cared about driving. Now, Vettel drives a rainbow bicycle, Lewis is passionate about human rights and Norris addresses mental health. Everybody has the right to think.

“To me it is about deciding whether we should impose our beliefs in something over the sport all the time. I am from an Arabian culture, I am international and Muslim. I do not impose my beliefs on other people, no way.”

Vettel is a regular proponent of equal rightsGetty

Rocking the Pride Star for the month of June, to celebrate and support the LGBTQ+ community, and raise awareness for #PrideMonth

@LewisHamilton and @GeorgeRussell63 explain why it’s so important

Vettel was asked about the comments ahead of the Azerbaijan Grand Prix and said: “Everything that Lewis addresses, Lando addressed, I am trying to address, are very important topics and I think they are much bigger than any sport can ever be.

“Nothing changes for me,” he said. “I continue to do what I do with or without support.

“I think Formula 1 created a space for us to be able to do what we wanted to do last year and we don’t necessarily have that space this year but it doesn’t stop us.”

Hamilton, who recently launched his own diversity commission will continue his work in opening the sport up to a wider audienceGetty

He later added: “I encourage all the drivers to be more outspoken and use their platform.”

Norris, who’s over a decade younger than both of his competitors also said he hoped drivers would always have the backing to express their views.

He said: “As drivers we’re obviously here to drive, that’s our primary job, but we have a platform where we can influence, and we can in miniscule ways change the world.

Norris spoke of his struggles during lockdownGetty

“It’s an amazing thing to think of that, we can have that influence and we can cause that change on people and hopefully always good change, and the more backing we can have on those things and and the more progress we can make the better.”

Dubai-born Ben Sulayem later took to Twitter to clarify his comments in response to the backlash.

He wrote: “As a driver, I have always believed in sport as a catalyst of progress in society.

“That is why promoting sustainability, diversity and inclusion is a key priority of my mandate. In the same way, I value the commitment of all drivers and champions for a better future.”

5 Hobbies You Can Pick Up While Studying in the US