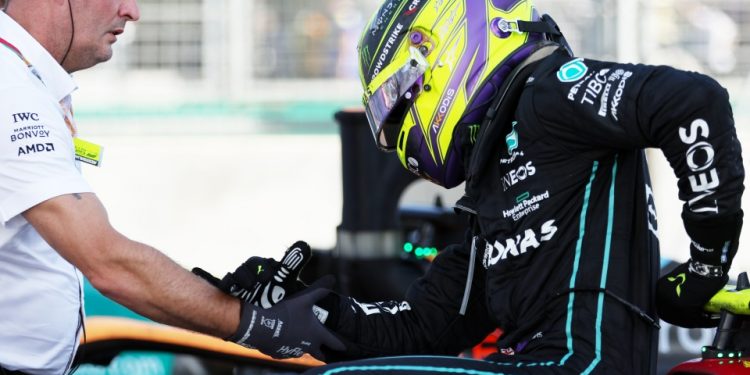 Lewis Hamilton has bizarrely said his Mercedes car ‘is so bad’ that he may have shrunk due to bouncing issues that could be causing ‘micro-concussions’.

Last time out in Azerbaijan the Brit was seen struggling to step out of his W13, clutching his back after a bruising Grand Prix.

Team boss Toto Wolff cast doubt on Hamilton’s participation in Canada, saying his race was ‘definitely’ at risk, but the Brit returned to Montreal.

Sadly, though, so has his car’s bouncing.

Moving on from ‘porpoising’ earlier in the season where airflow under the car was making it lift and fall at high speeds, the Mercedes is now colliding with the ground due to low ride heights, inflicting a vertical g-force of up to 10G.

Mercedes, and in particular Hamilton, have clearly been suffering worse than anyone else, and the 37-year-old has again revealed how bad things have become.

“In terms of micro-concussions, I’ve certainly had a lot more headaches in recent months,” he said.

“But I haven’t seen a specialist on it and just took painkillers. So hopefully I don’t have a concussion.

“I feel like I’m a little smaller this week. Drive problems aren’t great, especially for longevity.

The curbs in Canada are punishing the Mercedes pairGetty

Perez was ‘dirty’, threatened with ‘punch in the face’ – now he challenges Verstappen

“There are things we can do. We don’t need long-term injuries. We have to work closely with the FIA. I don’t think they are complacent.”

Following the race in Baku, Wolff also claimed that 19 of the 20 drivers on the grid backed change, apart from Alpine’s Fernando Alonso.

The sport’s governing body, the FIA, have since issued a technical directive with plans to put a limit on the oscillations, and after gathering data during Friday practice in Montreal, Hamilton was still suffering.

“This car is so bad,” he said at the start of an interview with SkyF1.

Hamilton was again in big trouble in CanadaSkyF1

“We’re trying lots of different things, the experimental floor on my side which didn’t work, nothing we do to this car seems to work.

“We’re trying different set ups, me and George [Russell] went with much different set ups in FP2 to see if one way works and one way doesn’t, I’ll wait to hear how it felt for him but for me it was a disaster.

“It’s like the car is getting worse, it’s getting more and more unhappy the more we do to it, we will keep working on it but I think this is the car for the [rest] of the year.”

Covid-19 creates unique challenges for unrecognised territories: Can a post-pandemic world be more inclusive and democratic?