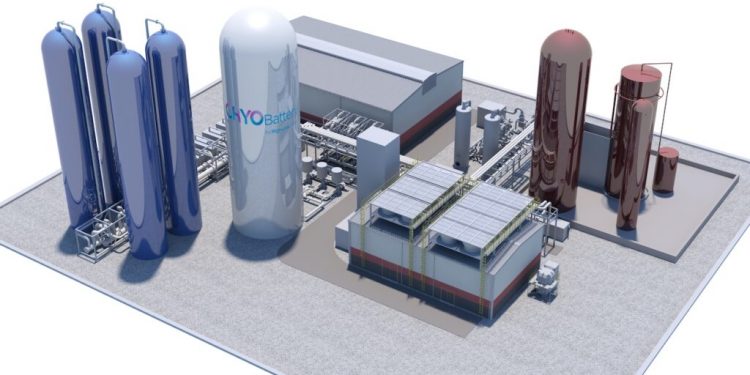 The CRYOBattery technology is touted as a means to provide bulk and long-duration storage as well as grid services. Image: Highview Power.

The feasibility of building large-scale liquid air energy storage (LAES) systems in China is being assessed through a partnership between Shanghai Power Equipment Research Institute (SPERI) and Sumitomo SHI FW.

The technology, developed and commercialised by UK company Highview Power, is being touted as a suitable means to provide bulk and long-duration energy storage to complement renewable energy and replace the role of fossil fuels in the electricity sector.

Both would be 50MW output, meaning the smaller system will be 200MWh and the larger one 400MWh. They would be deployed at SPERI’s Binhai Power Station Energy Storage Demo project.

Energy-Storage.news has reported on and documented the journey the LAES CRYOBattery technology has taken from its first megawatt-scale demonstration project in England, commissioned in 2018, to the construction now being underway of Highview Power’s first truly large-scale project, a 50MW / 250MWh system, also in England.

LAES cools ambient air to -196°C, to be stored as a liquid at low pressure, which is then heated and expanded to drive turbines to generate electricity. The technology is designed to be manufactured using adapted off-the-shelf components and techniques already used in existing industries, which Highview Power has said keeps costs low.

SPERI is a subsidiary of the State Power Investment Corporation (SPIC), one of China’s national generation companies with an installed capacity of 190GW including 74GW of solar and wind.

Sumitomo SHI FW has been in partnership with Highview Power since 2020, being a lead investor and shareholder in the technology provider.

A Sumitomo SHI FW representative told Energy-Storage.news that the company believes LAES to be a “viable means of creating long-duration energy storage (LDES)”, having carried out a due diligence process on the technology.

Sumitomo SHI FW senior VP for energy storage Tom Steitz said in a statement that long-duration storage is “emerging as a critical need for electric grids to become 100% renewable,” calling the partnership with SPERI an “important step towards making this a reality”.

In addition to being able to provide energy shifting “anywhere between eight hours to a few days,” Sumitomo SHI FW found during that due diligence that the technology can also provide grid stability services like inertia, short-circuit power, reactive power and balancing for renewable energy integration.

Last year, China’s government put in place a plan to deploy 30GW of grid-scale energy storage and the country is targeting for half of its installed power capacity to be renewables by 2025. Its target year for achieving carbon neutrality is 2060.

“We are pleased to engage with Sumitomo SHI FW for this important demonstration study of LDES which is the cornerstone of China’s energy transition plan to be carbon neutral by 2060,” SPERI president Chen Honghai said.

In addition to its project underway in the UK, Highview Power is also actively seeking to deploy its systems at scale in the US, Spain and across Latin America beginning with a proposed 50MW / 500MWh project in Chile.