Liverpool defender Joel Matip should have been SENT OFF for challenge that ‘could have broken Kelechi Iheanacho’s neck’, insists Jamie O’Hara 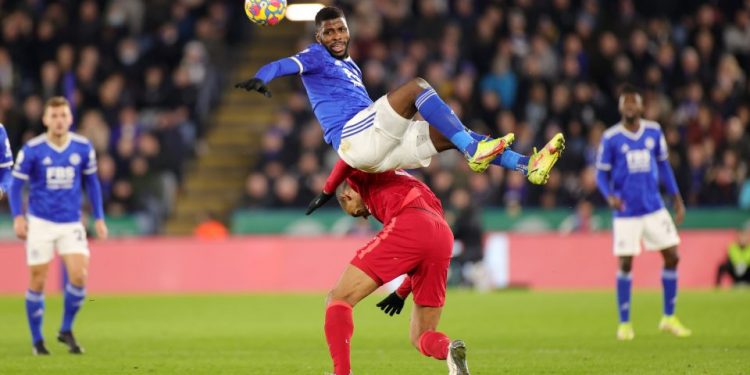 Joel Matip was lucky to avoid a red card after Kelechi Iheanacho was left in a heap during Liverpool’s clash at Leicester, says Jamie O’Hara.

Iheanacho challenged the Reds defender from a Leicester goal kick but had a nasty fall on his way down.

Could Matip have done more to stop Iheanacho having a nasty fall?Getty

The Foxes forward thankfully didn’t suffer a serious injury and carried on playing after a couple of minutes of treatment at the end of the first half.

But the incident left Jamie O’Hara outraged, the talkSPORT host insisting Matip should have been dismissed for his part.

“Matip should be off. I hate players that lean over and players go over the top, could break his neck. Refs need to stamp it out,” O’Hara tweeted just after the incident.

Although Iheanacho was fine afterwards, the incident may leave a sour taste in the mouth of Brendan Rodgers.

Leicester full-back Ricardo Pereira suffered a break in his leg during their Carabao Cup defeat to the Reds on December 22 – the injury coming as a result of Liverpool youngster Tyler Morton’s reckless challenge.

Liverpool starlet Morton was guilty of a horror challenge on Pereira, which left the Leicester ace with a broken bone in his legSky Sports

But Liverpool were the ones feeling upset when the match finished as the resolute Leicester secured a 1-0 win.

Ademola Lookman’s fine finish just before the hour proved to be the winner in a match that saw Kasper Schmeichel save Mohamed Salah’s first-half penalty.

Strong Demand for Retail Stock Expected to Continue Through to 2014