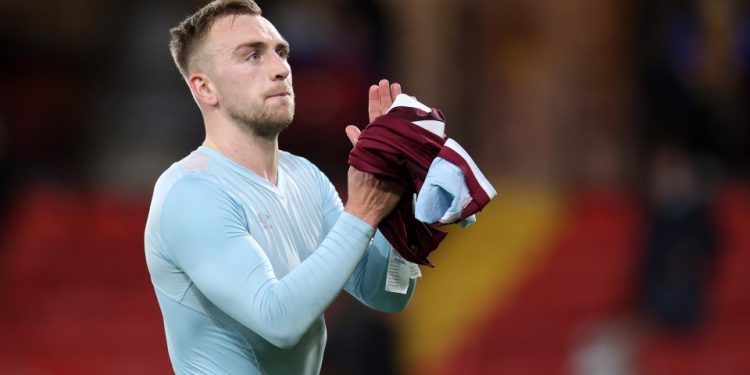 Jarrod Bowen has been tipped for an England call-up after a dazzling display for West Ham as he grabbed three assists in their win over Watford.

Bowen was the star of the show as the Hammers bounced back from three consecutive defeats to seal a much-needed three points at Vicarage Road.

Bowen seems to be getting better with every gameGETTY

The 25-year-old grabbed three assists and had a goal disallowed by VAR in what was a five-star performance that proved why the likes of Liverpool are believed to be considering a bid to sign him next summer.

He has gone from strength to strength following his move from Hull City and with Mohamed Salah so far not signing a new contract, he could be an ideal replacement.

Former Chelsea striker Tony Cascarino told talkSPORT Breakfast: “He had an amazing goal record at Hull City before West Ham bought him. It was something like 50-odd goals in 120 appearances. That’s not bad for someone who is not a natural centre forward.

“He’s direct and he’s a bit like Salah where he always seems to get a chance in a game and will run at people and play in different positions. He has great energy. He will help his full-back out all the time.

Bowen was instrumental in West Ham’s victory over WatfordGETTY

“He’s come on leaps and bounds and you have to give David Moyes credit for that. He’s stayed with him.

“Benrahma is more skilful, on the other side he’s got loads of tricks in his armoury.

“Bowen is more predictable but very effective. He will always outscore Benrahma.”

With the World Cup coming next winter, Bowen is making a serious case for being included in Gareth Southgate’s England squad.

Former Hammers star Trevor Sinclair thinks he’s playing his way into the side.

“Bowen for the World Cup squad if he continues,” Sinclair wrote on Twitter.

The forward now six assists and three goals in 18 Premier League appearances this term may be hard to ignore for much longer.

West Ham assistant Stuart Pearce believes it will not be long before Southgate gets him into the fold to take a closer look.

“There’s no doubt that Stevie Holland and the Gate [Gareth Southgate] have their eyes on him,” Pearce told talkSPORT Breakfast.

“He’s playing well at the moment and I don’t see any reason why he shouldn’t be considered for England. At least to have a look at, get him around the squad and see what they think of him and look at him at close quarters.

“We are delighted with him and has been a magnificent acquisition since Dave [Moyes] brought him in to the football club.

“We hope to give him a platform to show his talent here.”

Bowen has been dependable for David Moyes this seasonGetty

He added: “He’s been brilliant for us. He’s got bags of energy and has probably played more minutes for us than any player in our squad this year.

“His versatility to play up front when Mic [Michail Antonio] has not been available has been vital for us.

“Not only does he play off the right, that’s his favoured position, but has led the line for the tea. Has bags of energy, is durable.

“The good thing about him, and it’s not a criticism, is that we feel there is more to come.”

Healthtech could be Poland’s next big export success story