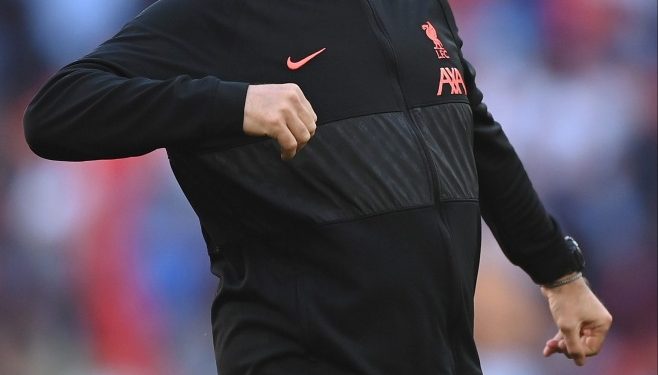 In the club’s 3-2 FA Cup semi-final success over Manchester City, more impressive stats were achieved, and one more could be on their way by the way of an unprecedented quadruple.

Jurgen Klopp was overjoyed at full time, Liverpool will be making a third trip to Wembley this seasonGetty

In an exhilarating affair at Wembley Stadium, the Reds raced into a three goal lead thanks to an emphatic header from Ibrahima Konate, and a brace from Sadio Mane.

Goals in the second half from Jack Grealish and Bernardo Silva gave Pep Guardiola’s side hope.

But despite a nervy end, Liverpool have booked their place in the final where they will play ether Chelsea or Crystal Palace on May 14.

And in securing their spot at the showpiece event, the Reds have now become the first team in history to play in the League Cup final and FA Cup final for a third time in the same season.

On the first occasion, The Reds beat Birmingham City in the League Cup and Arsenal in the FA Cup.

Ten years ago, it was Cardiff City in the League Cup, which they won on penalties, and Chelsea, where they were beaten 2-1.

Michael Owen scored a brace against Arsenal in the FA Cup

Dalglish oversaw the Reds’ success against Cardiff in 2012

Most read in FA Cup

Domestic success has eluded the record League Cup holders for many years, but this season they got their hands on the trophy by beating Thomas Tuchel’s side on penalties.

They will now hope to do the same against either the Blues or the Eagles.

A large part of that success has come from the players, with Ibrahima Konate and Thiago playing a big part in the club’s recent success.

And because of that, they have even set records of their own.

Konate, a summer signing from RB Leipzig, has been a tremendous acquisition for the club.

He was on target at Wembley for a third game running, having found the net against Benfica in both Champions League quarter-final ties.

But the most remarkable achievement is that he is still yet to taste defeat when featuring for the Reds.

22 games, he’s either started or been substituted on, and has won 18 of those and drawn just four.

Certainly a good omen, he and Liverpool fans will hope that record continues.

Konate produced an emphatic header to open the scoring at WembleyGetty

In the last five seasons, Thiago reached the DFB-Pokal in 2017/18, when his Bayern side lost 3-1 to Eintracht Frankfurt.

Happier success would follow the next two campaigns as he got his hands on the trophy when the German giants beat RB Leipzig and Bayer Leverkusen 3-0 and 4-2 in 2019 and 2020 respectively.

In his first season at Anfield, no success would come his way, but that has not proved to be the case this season.

He sadly had a mix of injuries in the route to the Carabao Cup final, and was also ruled out in the last game.

Thiago has been a brilliant acquisition for LiverpoolGetty images

But that hasn’t been the case in the FA Cup, where Thiago helped the Reds make their way to Wembley again, after producing a superb performance against Man City.

Now because of that, he has now reached finals in four of the last five seasons.

Liverpool are on the hunt for more trophies, and both Thiago and Konate will be key as they plan to lift more silverware in the coming weeks.

Betfair Football Special – Get £50 Free Bets when you bet £10

Charles tells Commonwealth leaders dropping Queen is ‘for each to decide’