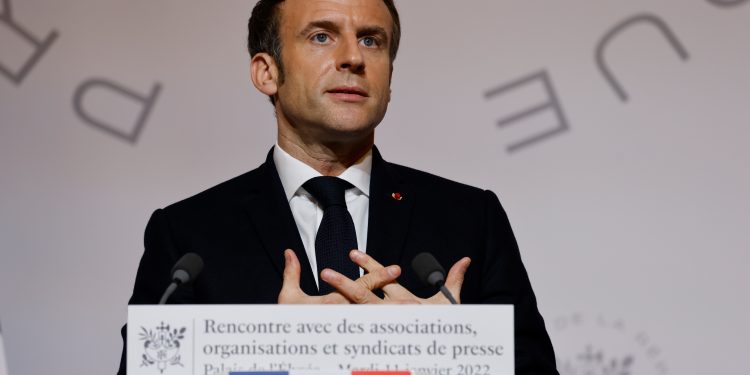 PARIS — French President Emmanuel Macron says online platforms and foreign “propaganda” media are the main drivers behind the spread of disinformation in the country — and he wants to rein them in.

“Online platforms, influencers, and also citizens who sometimes take a considerable place in the public debate precisely through these new platforms … must have a framework of responsibility that is yet to be built,” he said Tuesday during the annual new year speech before the country’s press corps.

“The same must apply to foreign media authorized to broadcast on French soil,” the president added, in a clear allusion to Russian outlets such as Sputnik and RT.

Macron’s remarks built on the conclusions of a report delivered to him earlier Tuesday that pitches guidelines to fight against disinformation and conspiracy theories online. At the end of September, he tasked a group of scholars, sociologists, professors, journalists and historians with working on the issue, in a committee dubbed “the Enlightenment in the digital age” — a reference to the 18th-century French philosophical movement.

The president said that thinking about how to fight fake news while protecting accurate information and reliable media should happen at the EU level, and go beyond national electoral deadlines.

The speech comes at a crucial time for Macron, just a few months away from April’s high-stakes presidential vote in which he’s expected to seek reelection, and also amid strained relations with the press.

In 2017, Macron’s campaign was attacked by Russian-backed hackers and only a few weeks ago, his wife First Lady Brigitte Macron was the target of a conspiracy theory falsely claiming she’s transgender.

“I say it here with great gravity: We are today a democracy sometimes naive … We let propaganda actors financed by foreign authoritarian regimes — that do not respond in any way to a regime of responsibility or journalistic ethics — inform and participate in the debate as journalists,” he said.

In recent years, the French president has usually used the annual address to the press to pitch new legislation related to media and information. This year, however, he has too little time ahead of the election to ensure any new rules actually materialize, but he hinted in his speech about potential future regulation if he is reelected.

“On the question of algorithms, we will collectively need to have debates, and without doubt regulations,” Macron said. He added that researchers should have more access to “the data and algorithms” of online platforms — which is likely to become a reality via the EU’s Digital Services Act, a content moderation bill currently being discussed in Brussels and one of France’s priorities during its Council of the EU presidency.

Macron also promised the media he would go after Big Tech companies again if they refuse to pay for news.

“We will complete, if necessary, our French and European texts in order to reach the end of the goal that was ours and remains ours: the fair remuneration of copyright and neighboring rights,” he said.

Next year will be critical for the rule of law