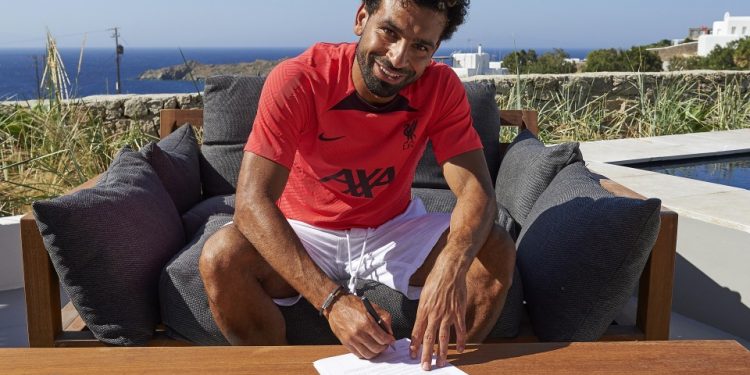 Salah, 30, became the highest-paid player in Liverpool’s history by signing a three-year contract thought to be worth £400,000-a-week.

With the Egyptian forward’s previous deal due to expire in 2023, there were fears the Reds may have to sell their star player or risk losing him for nothing next summer.

Liverpool had already been forced to let Sadio Mane join Bayern Munich due to a similar contract situation and Salah’s future became a priority.

A long and drawn-out saga featured public comments from Salah and cryptic messages from his agent on social media, amid suggestions the Reds were initially reluctant to meet his wage demands.

After another prolific campaign, with 31 goals in all competitions, it appears the club eventually changed their mind.

While the news is music to the ears of most Liverpool fans, some have been critical of the decision to hand the most lucrative deal in the club’s history to a 30-year-old.

Arsenal discovered the consequences of doing exactly that when Pierre-Emerick Aubameyang and Mesut Ozil began to dramatically underperform after landing big-money deals.

Neville responded to the news on Twitter with a string of laughing and winking emojis, alongside the message: “Salah has played them hasn’t he.”

However, ex-Republic of Ireland striker and Liverpool fan Tony Cascarino believes the new deal was a no-brainer for the Reds.

The Weekend Sports Breakfast host said on talkSPORT: “If I was a manager and I was getting three years more work out of one of the best goalscorers in European football, I’d be delighted!

“I’ve never seen a player who creates so many chances for himself. He’s always running and chasing and hassling defenders.

“Is there a slight risk that some players take their foot off the pedal after these incredible deals? I don’t see the Aubameyang, [Alexis] Sanchez or Ozil type of player in him.”