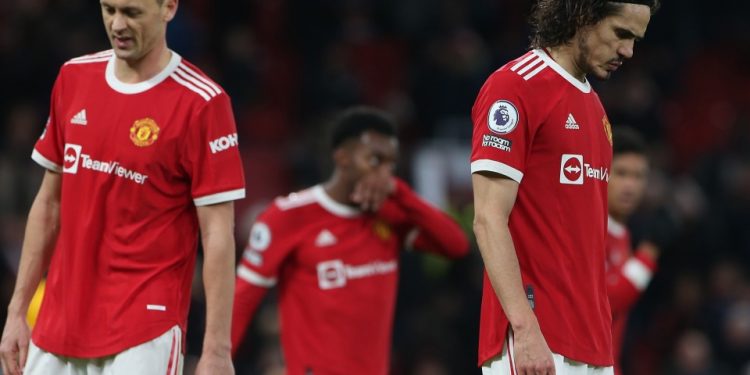 This Manchester United team are ‘scared’ to wear the shirts and Ralf Rangnick has some big decisions to make, according to Darren Bent.

The Red Devils were under par in their 1-0 defeat to Wolves on Monday night, with the result a big blow to their Premier League top four chances.

It follows a poor performance against Newcastle last week, with pressure increasing on interim boss Rangnick to turn things around.

Luke Shaw admitted after the game that he didn’t feel the Red Devils were all there together and struggled.

United legend Rio Ferdinand also was concerned about the body language of some of their star players – and Bent agreed, saying the United fear factor has completely gone.

The former England striker told the talkSPORT Breakfast: “Rio Ferdinand has a point. When you played Manchester United when they were really successful, you used to stand in the tunnel and every single one of their players used to stand their with their chest out and they wanted to carry the burden of that shirt and wear it with pride.

United are still only four points off the top fourGetty

“It’s almost like this Manchester United team are scared to wear the shirt. Even when they get taken off for substitutions, they can’t get off the pitch quick enough.

“Even Marcus Rashford at the minute seems to have the world on his shoulders. He’s thinking about every else other than football.

“I’m not quite sure what direction they are going in.”

On those comments by Shaw, Bent insisted the players have to take responsibility for their attitude.

“When you play for that football club and that arena, surely if that doesn’t get you up for football then I don’t know what will,” the talkSPORT pundit added.

“That’s one of the most iconic stadiums in football and playing for arguably the biggest club in the world.

“The motivation line he gave there is not a good look. That doesn’t fall on Ralf Rangnick, that falls on the players. They are the ones who have to get motivated.

“[Cristiano] Ronaldo has been made captain and it doesn’t matter how he plays, he’s always going to play.

“The likes of [Mason] Greenwood, who is giving absolutely everything, and Jadon Sancho, who is trying to rediscover his form, just not getting a fair crack at it.”

Ex-Charlton, Tottenham and Sunderland striker Bent also warned that Rangnick must be prepared to make some huge decisions to turn things around at the club – including dropping superstar Ronaldo, if need be.

He added: “They need to find some consistency and I thought Rangnick was the man to do that. He is going to have to make some big decisions.

“He did leave Bruno [Fernandes] out and he made a real difference when he came on.

“That might be he has to take Ronaldo out at times, put him back in, and even [Edinson] Cavani. You can’t just keep being predictable.

“He can’t keep going ‘who can I use as a scapegoat, Greenwood and Sancho, I’ll take them off’.

“You can’t keep doing that. You have to stick with them and make some big decisions.”

Budapest becomes latest city to clamp down on Airbnb