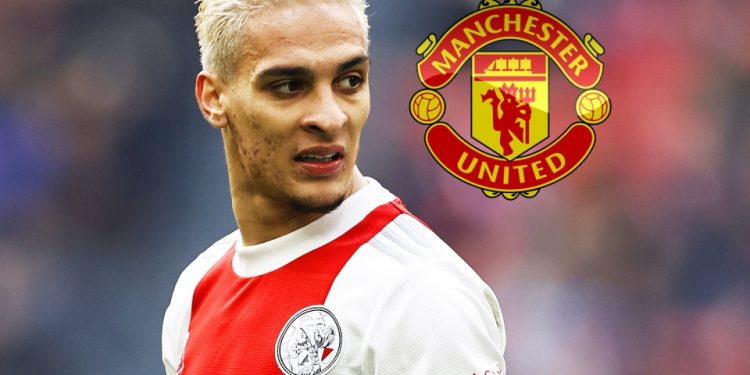 Manchester United have made an offer £51million bid for Antony, however it falls almost £20m short of Ajax’s valuation for the player.

The club have been heavily linked with the Brazilian winger, who was coached by new Red Devils boss Erik ten Hag with the Eredivisie club.

A big-money bid has been made for Antony but Ajax are not keen to sell him and have told Man United they will have to stump up a bid of £68m for him, according to GOAL.

The report adds that the Antony’s agents are pressing Ajax to accept a lower offer from Man United.

Antony’s contract with the Amsterdam club runs until 2025 and new coach Alfred Schreuder is keen for the Brazil international to remain.

Schreuder recently said: “It is clear that we want to keep that boy. I think he still has a contract until 2025. I really want to work with him; he knows that, and the club knows that too.”

Man United have made one signing this summer, bringing in Netherlands left-back Tyrell Malacia from Feyenoord.

‘Too many mistakes,’ Ten Hag heard telling squad in training but Maguire is praised

As well as Antony, the 13-time Premier League winners have been heavily linked with moves for Ajax centre-back Lisandro Martinez as well the Dutch club’s former midfielder Frenkie de Jong.

They have said goodbye to midfielder Paul Pogba, who’s closing in on a move to Juventus.

Meanwhile, Cristiano Ronaldo is itching for a move away due to Man United’s failure to qualify for the 2022/23 Champions League.

However, Dutch football expert Marcel van der Kraan suggested that Ronaldo going will at least be a massive boost in Man United’s bid for Antony.

He told talkSPORT: “This will all depend on Ronaldo staying or going because if Ronaldo goes, you need a big-name player for Manchester United.

“One of the four biggest clubs in the world cannot afford to enter the season with an average forward line.

“I think the crowd at Manchester United are used to having a marquee player. They need somebody special.”