Mariana Ionita, CNAIR: We try to keep up with the business environment and expand the infrastructure 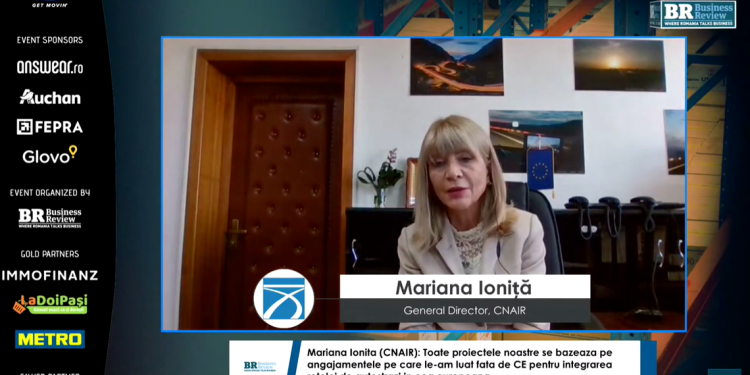 There are only 1,000 km of highway in Romania, scattered in Transylvania and in the south. That is why all CNAIR projects are based on the commitments we have made to the EU to be integrated through the motorway network,” says Mariana Ionita, general manager of CNAIR, at Re:Focus on eCommerce Retail & Logistics 2021 event, organized by Business Review.

„This year we launched projects on all sectors of the highway, including Sibiu-Pitești. We focus on extending at the country level and we will launch projects in all areas, including Moldova, where we have the Pan-European Corridor 9, Pitesti-Siret. Starting with May, three sectors were launched in the tender for the execution of works. This highway will be approached differently, meaning focusing on the execution. The first section, Buzău-Ploiești, will be launched in April, so that in May we will have the auction. In June-August, depending on the designer, we will have Buzău-Focșani, where there will be 3-4 sections. Later, it will be Bacău-Pașcani and then Focșani-Bacău,” says Mariana Ionita.

”Until the end of the year, the whole Pașcani-Ploiești piece will be auctioned or awarded for the execution of works, and next year there will be construction sites on the whole section. A little further back are the Siret-Suceava-Pașcani sections, there could be an express road, depending on what you get out of the technical design,” says Ionită.

”Work is now underway on the technical design for the road between Târgu Mureș and Târgu Neamț, which ensures the connection between Transylvania and Moldova. The feasibility study will be done in June or July and will launch the design on execution. We also hope that next week we will close the design on Târgu neamț – Iași – Ungheni. The A8 motorway is a zero-grade priority motorway,” explains CNAIR representative.Read more aboutAndrei Cretu (Pluria) joins the #futureofwork at BR’s Working Romania read more

”We are also working on the A13, which connects the Transylvania highway, in Brașov, with Moldova, on the A7. The expressway between the Brăila bridge and the whole of Moldova is also being designed. Towards the south of Romania, we are running the Pitești-Craiova expressway and we are starting the works at section 3. Unfortunately, at section 4, the last one, we had an appeal, but we will finish the auction soon,” says Ionita

”This year, the more advanced projects could be completed. Last year we finished the Bacău belt faster and the Romanian construction companies proved that it is possible. We will advance with the other sectors on Craiova-Pitești, we will completely close Sebeș-Turda, the 26 km. In addition, a section of the Transylvania highway, between Ungheni and Târgu Mureș, we have an Austrian company that works very well. And in the Chețani area we are trying to finish a section,” says Ionita.

”In addition, in Bucharest we will finish the Mogoșoaia Passage and part of the Berceni Passage and the connection between DN5 and the Friendship Bridge to Bulgaria. These are larger projects, with significant impact, there will also be sections of national road, but they are smaller.”

All options fraught with risk as Biden confronts Putin over Ukraine