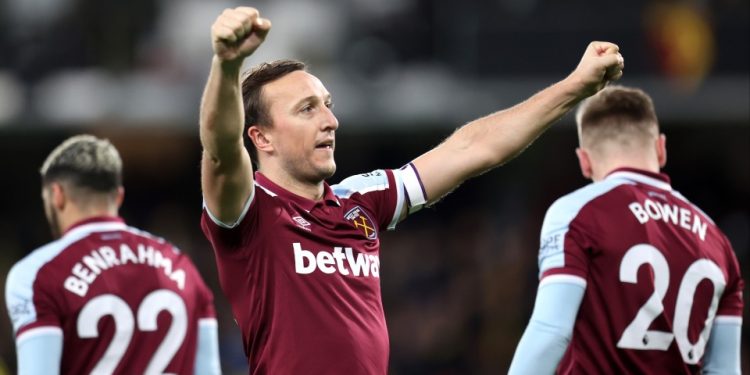 Mark Noble got his first goal in nearly two years for West Ham as he helped his side get back on track with a 4-1 win over Watford.

The Hammers needed to come back from behind to grab all three points after Emmanuel Dennis had put the Hornets ahead after just five minutes.

Tomas Soucek and Said Benrahma overturned the deficit by half-time, before Noble wrapped up the points from the spot and Nikola Vlasic added a fourth in injury time.

It was West Ham’s first win since the beginning of December, when they beat Chelsea, and was vital to keep pace with their rivals chasing the European places.

Watford took the lead in the fifth minute when Dennis was played in by Joshua King for his eighth goal of the season.

Dennis has been brilliant for Watford since signing from Club BruggeGetty

King found Dennis, who got between the West Ham defenders, but the forward had to weave his way across the box to create the angle for a shot which he struck past Lukasz Fabianski.

His 13 goal involvements for the season is second only to Mohamed Salah (24) in the Premier League.

West Ham had been the better side since going behind and scored a deserved equaliser in the 27th minute.

Soucek got a deserved equaliser for West HamAFP

Soucek fired past Daniel Bachmann after being found in space in the box by Jarrod Bowen.

Two minutes later, the visitors took the lead when Michail Antonio, on his return to the side, played in Benrahma.

The former Brentford forward’s shot was deflected into the back of the net past Bachmann, off Adam Masina.

West Ham looked to have added to their lead at the start of the second half, when Soucek played in Bowen after Dennis lost the ball.

However, the goal was ruled out for a foul by Soucek in the build-up.

West Ham added to their lead just before the hour mark when referee Darren England awarded the visitors a penalty after consulting the pitchside monitor.

Bowen was fouled by goalkeeper Bachmann after getting to the ball before him, and the official reversed his decision before pointing to the spot.

Mark Noble stepped up to take the penalty, sending the Hornets goalkeeper the wrong way to make it 3-1.

Noble had not scored since January 2020 and finally equalled Paolo Di Canio’s tally of 47 Premier League goals for the club.

Earlier this season, he was brought off the bench to take a penalty against Manchester United only to miss the spot-kick.

Only three players have now scored more penalties than Noble’s 28 – and they are Alan Shearer (56), Frank Lampard (43) and Steven Gerrard (28).

More misery was piled on Claudio Ranieri’s side as Vlasic netted the fourth in injury time, as relegation worries mount.

Watford remain the only Premier League team to keep a clean sheet this season and now face the prospect of losing star man Dennis to the Africa Cup of Nations next week.