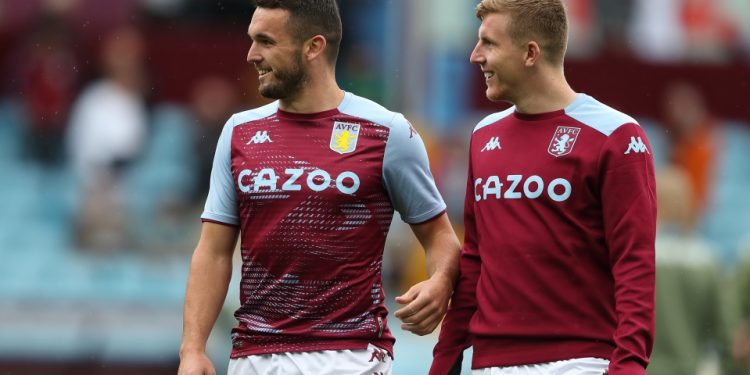 Matt Targett says Aston Villa are out for revenge against Chelsea when they meet in their latest Premier League clash on Boxing Day, saying the Blues’ COVID-19 issues present a big opportunity for three points.

The left-back was also full of praise for teammate John McGinn and manager Steven Gerrard, even if he was in awe of the Liverpool legend’s presence when he first arrived.

Targett hailed the influence the Scotland international has on the teamGetty

The Villa left-back is loving life under GerrardGetty

Since his appointment as manager, Gerrard has overseen a superb turn in form from his side that has seen them accumulate four wins from six games, with their two defeats coming against Liverpool and Man City.

Targett started in five of those six games and whilst he has shown consistency under Gerrard, he has admitted he was a bit nervous when the Anfield and England hero first arrived through the door.

“You’re wanting him to like you but, when you know it’s Steven Gerrard, you just put everything inside and you’re like ‘wow’.

Targett, like many have benefitted from the Liverpool legend’s arrivalGetty

“To be fair you get a bit star-struck at first but now I’m getting used to it! It’s so nice to have him as a manager.”

Having previously failed to take points against the top two in the league, Villa are up against the third best side in Chelsea.

The Villans have already faced the Blues this season, twice, with both games ended in defeat.

And Targett is hoping this time they will be able to produce a result that matches their performance.

“We know how good they’ve been this season, we played them twice already, once in the cup but we performed well,” the left-back added.

“I remember the game at their place, I remember we caused them a lot of problems but they beat us 3-0 on the day and the scoreline didn’t do us justice at all.

“We know it’s going to be a tough game, they’re missing a few players through COVID so they’re struggling a bit in terms of players, but we’ve got to take full advantage of that.”

One player who could help Villa secure a famous win over the London giants is McGinn, who Targett says is the player who ‘makes a lot of things tick’ within the side.

“John McGinn has been unbelievable this season, he’s playing with real confidence and he’s a massive part on how we play,” he said.

“He makes a lot of things tick in the midfield, you can see how much is improving this season but also you see what a massive player he is, even when he goes away on internationals and how much Scotland rely on him.

“It’s great to have someone playing so well and him to make such a big difference for us as a team.”

Providing the game doesn’t get called off, Aston Villa will take on Chelsea at Villa Park on Sunday 26 December, with LIVE commentary on talkSPORT from 5pm.

The Polish organisation training people with Aspergers to work in IT