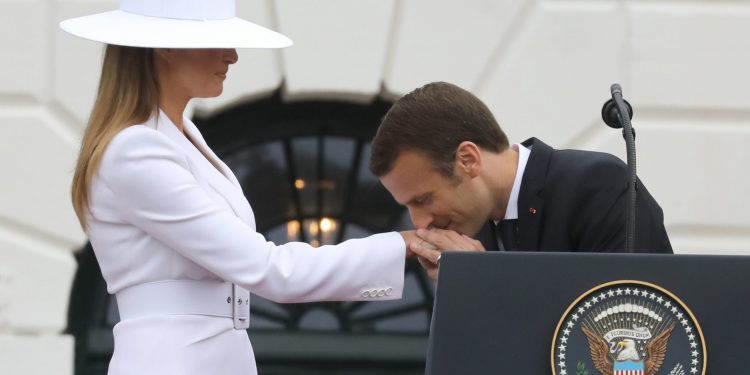 Christmas may have gone but it’s not too late to get your hands (and head) on a lovely, if pricey, gift — an “iconic” hat that Melania Trump wore when the Macrons visited the White House.

The former U.S. first lady announced Tuesday that, later this month, she will hold an auction called The Head of State Collection featuring three items: the “iconic broad-brimmed, one-of-a-kind hat” that she wore when Emmanuel and Brigitte Macron visited the White House for a state visit in April 2018; a watercolor of her wearing the same hat by French artist Marc-Antoine Coulon; and a digital version of that same artwork (in the form of a non-fungible token, or NFT).

The price? Well, bids will start at $250,000 — some of the money raised will go to charity — and you can only pay in cryptocurrency.

Melania Trump was heavily involved in planning the Macrons’ visit in 2018, which came less than a year after the Trumps were wowed by the militaristic bravura of France’s Bastille Day celebrations. To return the hospitality favor, she helped organize everything about the visit including the dinner menu, which featured a goat cheese gateau, tomato jam, buttermilk biscuit crumbles and young variegated lettuces; a rack of spring lamb and a New Orleans-inspired Carolina gold rice jambalaya; and a nectarine tart dessert infused with White House honey and accompanied by crème fraîche ice cream.

No word on how “young variegated lettuces” went down with her husband, whose favorite food, according to his former campaign manager Corey Lewandowski, is “a full McDonald’s dinner of two Big Macs, two Filet-O-Fish sandwiches, and a small chocolate shake – a total of 2,430 calories.” Former White House physician Ronny Jackson told the New York Times that he put cauliflower into Donald Trump’s mashed potatoes.