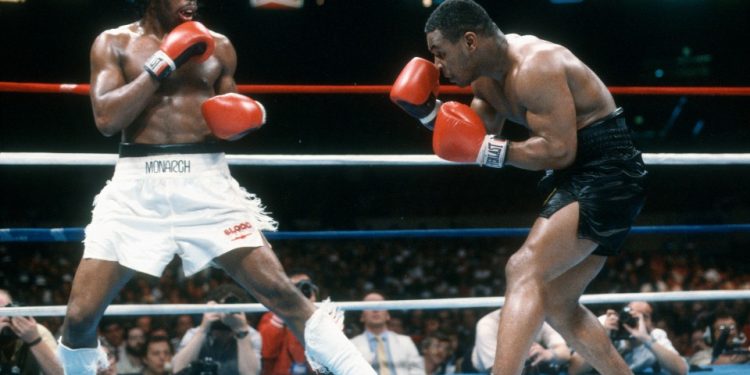 Mike Tyson got into the most infamous street fight of his life in 1988, a brutal brawl that left the undisputed world heavyweight champion with a broken hand but also fearing he had killed his bitter rival: Mitch ‘Blood’ Green.

A prizefighter and gang leader, Green had actually been an in-ring opponent for Tyson during his rise. He lasted the full 10 rounds with Tyson in 1986 in Madison Square Garden, six months before ‘Iron Mike’ became the youngest man to win a world heavyweight title by terrorising Trevor Berbick. The much taller Green heard the final bell by clutching and holding the 5ft 11in Tyson in close. But their rematch on the streets of Harlem at 4am was a short, savage affair.

Tyson took on and beat Green in New York City in May, 1986 – six months before becoming the youngest heavyweight champion in historyGetty

Green was already furious at Tyson, having claimed that promoter Don King had underpaid him and desiring a lucrative second fight that he was unlikely to get – inside the ropes, anyway. But Green had a secondary motivation for confronting Tyson in August ’88: he was part of a notorious New York gang and believed Tyson stepping into his turf, in the early hours of the morning, was a liberty he could not accept without losing face.

Tyson was in Harlem to visit a clothing shop called Dapper Dan’s to pick up an $850 white leather jacket with “Don’t Believe the Hype” – the title of a Public Enemy track – emblazoned across the back. At this point Green, who’d been told of Tyson’s presence, stormed into the shop bare-chested and spitting insults at his sworn enemy.

Tyson had been out nightclubbing and drinking beforehand. Nonetheless he claims in his autobiography, Undisputed Truth, that he was trying to play the role of a corporate, endorsement-friendly champion at the time. So Tyson replied: “Now, Mitch, you must consider what you are doing. I do not think that this course of action in the long run is advantageous for your health. You’ll remember that I already vanquished you when we met in the ring. You need to proceed to the nearest exit immediately.”

However likely you think it is that a drunk, 22-year-old Tyson delivered this speech on the mean streets at 4am, what followed was undeniably a violent beating. Tyson claims it started when Green ripped his shirt pocket, forcing him to retaliate. Green’s version is that Tyson turned his rings around (so as not to damage them) then suckerpunched him. But Tyson undoubtedly landed the first punch – and several more followed.

Dapper Dan’s Boutique was the setting for the unlikely heavyweight showdown, while a scene in Rocky V looked remarkably similarGetty

“I was drunk and didn’t realise that he was high on angel dust [PCP] so he wasn’t going to hit me back,” recalled Tyson. “I was throwing punches and crunching this guy and he was weaving and wobbling from side to side like he was going to fall but he didn’t go down. So I did a Bruce Lee ‘Enter the Dragon’ roundhouse kick on his ass and he went down.”

However as Tyson and his driver headed to their car, a zombie-like Green pops “back up like Jason from ‘Friday the 13th’ and kicks me in the balls”. Tyson put Green down again, but when he tried to make good his escape in his Rolls-Royce, his driver told the champ they could not move as Green was under the wheels. ‘Blood’ got up once again and tore off one of the car’s wing mirrors, further enraging Tyson. This time, Tyson got out of his limousine and landed “my signature punch, the right uppercut. Boom! Mitch went flying into the air and came down like a ragdoll, right on his head.”

Tyson was terrified in the aftermath that he had actually killed Green. However by the time the police arrived at 5am, they found Green alive but sporting facial bruising, a left eye that was swollen shut and a nasty cut on the bridge of his nose. Tyson did not escape the chaos without injury: a hairline fracture of his right hand meant his upcoming title defence against Britain’s Frank Bruno was postponed and eventually took place the following year.

The street brawl also added fuel to reports that Tyson, who two months earlier had produced the performance of his career by stopping two-weight world champion Michael Spinks in only 91 seconds, was spinning out of control away from the boxing ring.

The confrontation would not be the last time the pair crossed paths. Mere days after the incident Tyson couldn’t believe his eyes when, while out on a date in New York, he spotted Green cycle past him on a 10-speed bike. “That can’t be Mitch Green because I know the motherf***** is a zombie and he don’t come out in daytime,” Tyson assessed. But he was wrong and a verbal confrontation ensued until Tyson’s date cooled things down.

Green would later attempt to get his revenge in court, suing Tyson for $25million in 1997, nine years after the duel outside Dapper Dan’s. However ‘Blood’ was eventually awarded just $45,000 in court, which was not even enough to cover his legal bills. Nonetheless, Green reportedly left the courthouse shouting, “I’m the winner, I whupped him.”

Green certainly never whupped Tyson in the ring, or in the streets. But by frustrating him for 10 rounds in ‘Kid Dynamite’s first appearance at MSG, then by delaying his title defence against Bruno, Green definitely left his mark on Tyson’s career – and ensured their names are forever linked in a crazy footnote in heavyweight boxing history.