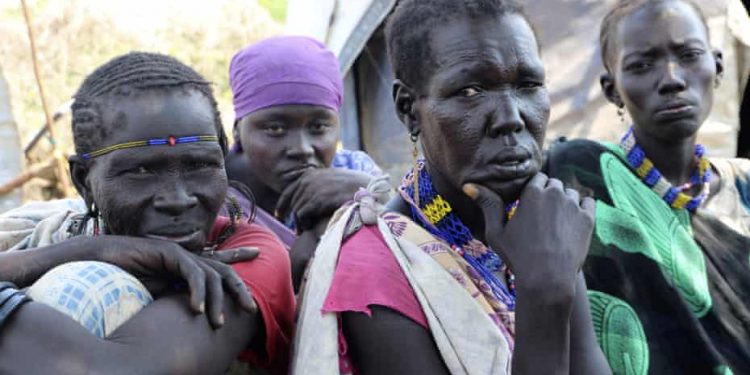 The World Food Programme has said it is suspending food aid to 1.7 million people in South Sudan, as the war in Ukraine sucks funding from the world’s crisis-plagued youngest country and causes the price of staples to soar.

The UN’s emergency food assistance agency said it had planned to deliver aid to more than 6 million acutely food-insecure people in South Sudan this year, as it did in 2021, albeit with smaller rations.

But, in a major cut likened by a spokesperson to a form of humanitarian triage, the WFP said it would now have to prioritise 4.5 million of the most vulnerable people in order to stop them dying of starvation during the lean season, between April and July.

“It’s a drastic cut because it’s a third of the total of people that we know require food assistance, but we had to do a kind of triage, if you will. We had to decide who to keep assisting and who we can afford to suspend the assistance from – not because they’re not in need but because they can survive,” said Marwa Awad, WFP spokesperson in South Sudan’s capital, Juba.

She is now very worried about the 1.7 million people cut off from support. “They are food insecure. And if aid is not given to support them, they will slide further down the scale of hunger and reach starvation level. If people are not nourished and are not reached regularly, they will get worse and worse and join the ranks of their brethren who are already looking death in the eye.”

Included in the cuts are free school meals for 178,000 of the poorest children. Awad said she had already heard through colleagues on Tuesday that parents were planning to take their children out of school and put them to work as a result of the suspension. A case of child marriage – a common byproduct of humanitarian crises – had also been reported, she added.

South Sudan, which gained independence in 2011 only to enter a protracted and bloody civil war shortly after, continues to see repeated bouts of conflict, as well as climactic shocks such as severe flooding and localised drought.

The Russian invasion has ratcheted up the pressure in several ways. Chiefly, funding is dwindling as countries race to allocate large budgets to meet the enormous humanitarian needs of Ukraine. “Donors are no longer actively supporting South Sudan as a crisis,” said Awad.

Compounding that shortage of funds is the pressure from the soaring costs of staples such as wheat and sunflower oil, much of which has historically been produced by Ukraine. A knock-on effect of the high price of wheat is that it has, in turn, inflated the cost of alternatives such as sorghum and maize, which Awad said had gone up by as much as 59% in South Sudan.

“In the marketplace I saw families going from one shop to the next to ask for sorghum. On finding that the price is very high, they’re unable to purchase it and they just go home hungry,” said Awad.

Rising fuel prices have also placed pressure on the WFP’s operations in the country, where less than 2% of roads are paved, she added. The agency has calculated it needs an extra $2.8m just to cover food transportation costs.

Overall, the WFP says it needs an extra $426m (£352m) to reinstate its full intended programme of food assistance for the next six months. “The World Food Programme [has] a foothold in the hardest-to-reach areas,” said Awad. “So with that funding we can make a difference. But we need donors to be generous again and to support people here.”

The most recent Integrated Food Security Phase Classification (IPC) assessment warned that 7.74 million people in South Sudan will face severe acute hunger during the lean season, while 1.3 million children will be acutely malnourished.

The 4.5 million people who will continue to receive WFP food rations this year include 87,000 who are already experiencing catastrophic hunger and living in famine-like conditions.