‘Miscarriage of justice’: outcry after Colorado trucker given 110 years for fatal accident 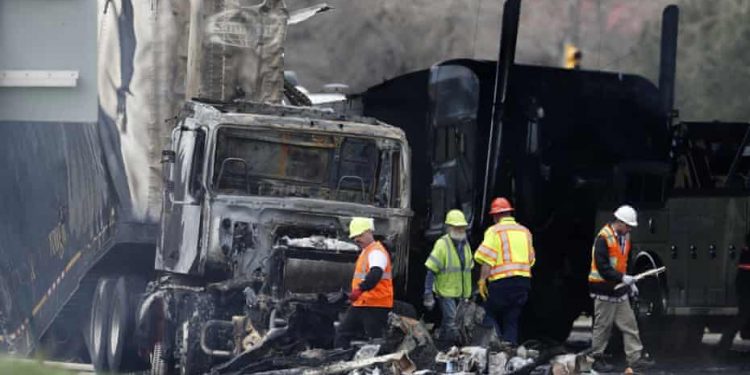 The case of a young Colorado truck driver sentenced to 110 years in prison over his role in a fatal collision has prompted widespread calls for leniency and fueled criticism of the US justice system.

On Tuesday, the Colorado district attorney whose office prosecuted the case asked the court to reconsider the sentence of Rogel Aguilera-Mederos, 26, following the backlash over a punishment that’s been called unduly harsh.

Aguilera-Mederos was convicted in October of vehicular homicide and other charges related to a deadly crash in April 2019, which occurred while he was hauling lumber in the Rocky Mountain foothills. He has said he was descending a steep portion of the highway when the brakes on his semi-trailer failed, leading to a multi-vehicle pileup and four deaths.

The judge in the case has said he was obligated to give Aguilera-Mederos the lengthy sentence based on minimum sentencing laws for the charges, prompting further criticism of the criminal justice system. .

More than 4.5 million people have signed a petition calling for Colorado’s governor, Jared Polis, to grant clemency to Aguilera-Mederos or commute his sentence. Meanwhile, truckers and civil rights groups have expressed outrage over the sentence.

“It is a stark miscarriage of justice,” said Domingo Garcia, the president of the League of United Latin American Citizens (Lulac). “Here’s a man with no prior criminal record who went to work to feed his family. The brakes go out on his truck. It was a terrible accident. He’s given 110 years for the first crime he’s ever committed, a crime that was not intentional.”

Lulac sent a letter to Polis on behalf of Aguilera-Mederos, a Cuban immigrant, requesting a pardon or a reduction of his sentence. Aguilera-Mederos’ lawyer has filed a clemency petition to the governor.

Aguilera-Mederos’s truck plowed into vehicles that had slowed because of another wreck in the Denver suburb of Lakewood, leading to a chain-reaction collision involving 28 vehicles that ruptured gas tanks and caused a fireball that consumed vehicles and melted parts of the highway.

Prosecutors argued that Aguilera-Mederos could have used a runaway ramp alongside the interstate, which is designed to safely stop vehicles that have lost the function of their brakes. But, Aguilera-Mederos testified that he was struggling to avoid traffic and to shift his truck into lower gear to slow it down.

Alexis King, the district attorney whose office prosecuted the case, told the Denver Post that Aguilera-Mederos didn’t accept efforts to negotiate a plea deal, and that the convictions recognized the harm caused to victims of the crash.

Under the reconsideration motion filed by the district attorney, the court can modify the sentence and go below the mandatory minimum, said Ann England, who teaches in the criminal defense clinic at the University of Colorado law school.

The judge in the case, Bruce Jones, had said the sentence was the mandatory minimum term required under state law, but that a lesser punishment would be appropriate. Mandatory minimum sentencing laws required that sentences on 27 counts of vehicular assault, assault, reckless driving and other charges run consecutively. “I will state that if I had the discretion, it would not be my sentence,” he said.

Mandatory minimum sentences have helped to drive mass incarceration and over-incarceration in Colorado and the US, England said.

“I think people should be asking why we have these mandatory minimum prison sentences,” England said. Mandatory minimum sentencing takes the discretion out of the courts, and moves the balance of power from the court to the prosecutor, she said.

This case, England added, is “a condemnation of the way the system works and the way the mandatory sentencing works”.

“The sentence is extraordinary especially in light of facts of this particular case,” Silverstein said. “It underscores the problems with the criminal justice system.”

At Aguilera-Mederos’ sentencing, relatives of those killed in the collision said he should serve time for the crimes. Duane Bailey, the brother of William Bailey, asked the judge to sentence Aguilera-Mederos to at least 20 years, the Post reported. “He made a deliberate and intentional decision that his life was more important than everyone else on the road that day,” he said.

Aguilera-Mederos wept as he apologized to the victims’ families at his sentencing. He asked for their forgiveness. “I am not a murderer. I am not a killer. When I look at my charges, we are talking about a murderer, which is not me,” he said. “I have never thought about hurting anybody in my entire life.”