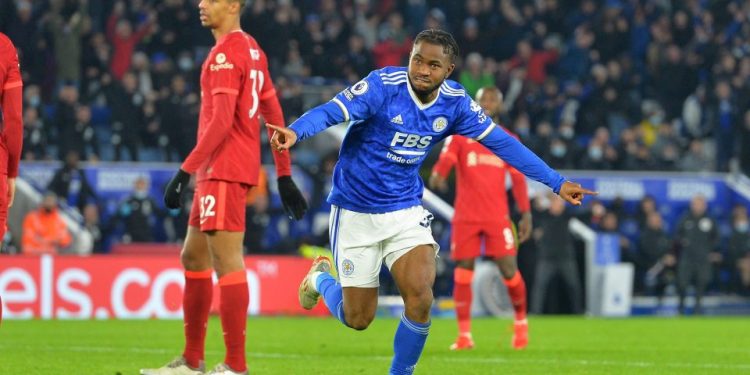 Mohamed Salah missed just his second ever Premier League penalty as a wasteful Liverpool side were punished against Leicester, losing 1-0 at the King Power Stadium.

Ademola Lookman’s fine second-half strike proved to be all that separated the two sides as the fantastic Foxes resolutely kept out Liverpool’s star-studded attack.

Salah missed a penalty for the first time since October 2017Getty

However, the Reds were guilty of lacking their usual composure in front of goal with Salah having an early penalty saved by Kasper Schmeichel. The Egyptian headed against the bar on the rebound.

Schemeichel also produced a brilliant finger tip save to deny Salah later in the first half and also denied Virgil van Dijk late on.

Sadio Mane managed to get the ball past Schmeichel but skied his effort when slipped through on goal shortly before Lookman broke the deadlock.

The victory will be a nice piece of retribution for Brendan Rodgers’ men, who were beaten by Liverpool on penalties in the Carabao Cup earlier in December.

Like Salah, Mane also didn’t have his shooting boots onGetty

Props must go to Schmeichel, who produced a number of top saves, including denying Salah from 12 yardsGetty

Victory breathed fresh life into the Foxes as they rose to ninth and five points off the top six after a difficult December which had seen them win just one of their previous six games and drop out of the Europa League.

They still needed Kasper Schmeichel at his best and the goalkeeper – who kept just his second clean sheet since the opening day – ensured they stayed in the game in the first half.

Jordan Henderson had already volleyed over before Wilfred Ndidi’s needless trip on Salah in the box presented the forward with the chance of a 16th-minute opener.

Salah had missed just two previous penalties in his Liverpool career but Schmeichel made it three when he threw himself to his right to stop a poor spot-kick.

The Egypt international then nodded a looping ball onto the bar before Leicester cleared. It was Liverpool’s first Premier League penalty miss since October 2017, when Salah failed to score against Huddersfield.

Salah’s weak effort was kept out by SchmeichelGetty

The Reds remained in the ascendancy, though, and Schmeichel needed to be alert to keep out Alex Oxlade-Chamberlain’s cross after Henderson just failed to connect.

Leicester had managed to contain their visitors but continued to rely on Schmeichel, the Denmark international brilliantly denying Salah after 32 minutes following Ndidi and Luke Thomas’ mix-up.

It kept Leicester level and they reminded Liverpool of their own threat when the previously quiet Jamie Vardy forced Joel Matip to block after Timothy Castagne’s cute flick.

It upped the ante for the Foxes and Liverpool lost the degree of control they had enjoyed for the majority of the match.

Even so, Henderson whistled a strike over just before the break and Diogo Jota’s snatched volley dropped wide as they pushed for an opener.

Jurgen Klopp will wonder how his side managed to lose that

The second half started much like the first, with Liverpool camped on the edge of Leicester’s area but unable to break down their stubborn resistance.

The Foxes remained dangerous on the break, though, and only an excellent interception from Kostas Tsimikas stopped Vardy reaching Kiernan Dewsbury-Hall’s centre.

But the Reds were still on top and Mane should have finally fired them ahead when he latched onto Jota’s through-ball.

He had Castagne for company but still just had Schmeichel to beat yet lifted over the bar.

It proved crucial as ex-Everton winger Lookman grabbed the winner on 59 minutes – 178 seconds after coming off the bench.

The forward had replaced Hamza Choudhury and he linked up with Dewsbury-Hall to evade Matip’s challenge and drill past Alisson from 12 yards.

Liverpool pushed for a late leveller which never came as Jota headed a corner wide with nine minutes left while Schmeichel kept out Virgil Van Dijk at the near post.

A memorable night for Leicester, who are back to winning ways

How will the LGBT issue play out in Poland’s European Parliament election?