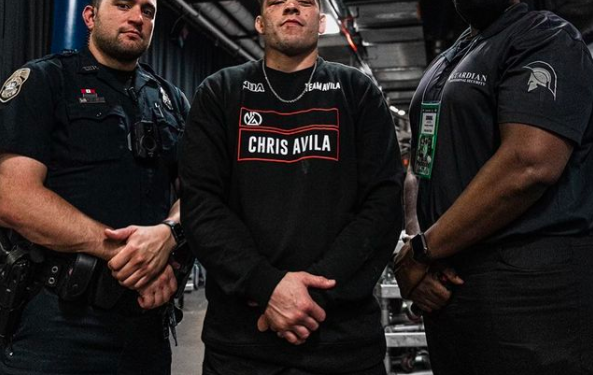 Nate Diaz had some fun at the Jake Paul and Tyron Woodley fight last Saturday, but the Paul brothers made sure he didn’t have too much.

The Stockton-native made his presence felt in Tampa, Florida last weekend, most notably when he faked punched a fan who flinched so hard he spilt his beer everywhere.

Nate Diaz posted a picture of the security detail

When asked by journalist Ariel Helwani who he thought would win between Paul and Woodley, Diaz replied “I don’t give a f***.”

According to Diaz, both Jake and Logan Paul employed personal security to make sure he didn’t get anywhere near them in the Amalie Arena.

“The Paul sisters hired this security team to make sure I wouldn’t get to them,” he wrote alongside an image of him and too burly looking men.

“Like I was actually trying too, but it’s all good with you guys I don’t take this fight thang with two seriously,” Diaz wrote on Instagram.

“You guys playing boxing with wrestlers who can’t box or lil ass Floyd and that’s not cool bruh, but it’s good.

“I’m a real fighter from the real fight game so don’t trip so hard when you see me fellas.

Diaz seems like a lock to fight Paul at some stage. The 36-year-old has one fight left on his UFC deal and boss Dana White has mentioned names like Khamzat Chimaev and even finishing the Conor McGregor trilogy as Diaz’s next opponent.

There have been no ideas that Diaz will re-sign with UFC after his next fight and the Stockton legend seems very interested in getting his payday with Jake Paul.

Diaz has asked UFC to book him a fight for January with no particular opponent in mind. That in itself says he wants to get it over and done with as quickly as possible.

Nate Diaz is one of UFC’s most popular stars

Back in June, Jake Paul tweeted: “I will knock out Nate Diaz after I knock out Woodley.”

He went on to say Diaz would get knocked out inside three rounds if they met.

Still, coming out of his one-punch knockout of Woodley last weekend, Paul has said he will be taking a vacation and, when he does return, it seems as though Julio César Chávez Jr is next in line.