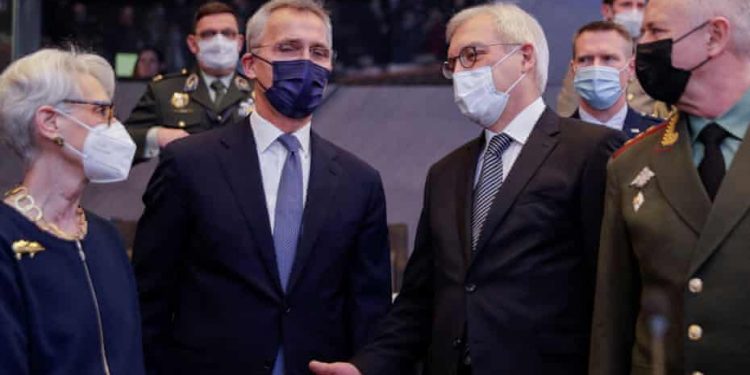 Nato discussions with Russia have concluded with no sign of progress towards narrowing substantial differences or defusing the crisis over Ukraine, and with the alliance’s secretary general warning “there is a real risk for a new armed conflict in Europe”.

After four hours of talks, the US delegation leader, the deputy secretary of state, Wendy Sherman, said she had heard nothing in Brussels that differed from the Kremlin position laid out at bilateral talks in Geneva, demanding a guaranteed end to Nato expansion and a withdrawal of alliance troops in formerly Soviet bloc countries that joined the alliance after 1997.

Those proposals remained unacceptable to the US and all Nato allies, Sherman said.

“We were basically saying to the Russians: some of the things you put on the table are non-starters for us. We are not going to agree that Nato cannot expand any further. We are not going to agree to go back to 1997,” she told reporters. “Together, the United States and our Nato allies made clear we will not slam the door shut on Nato’s open-door policy, a policy that has always been central to the Nato alliance.”

“We had a very serious and direct exchange on the situation in and around Ukraine and the implications for European security,” Stoltenberg said. “Our differences will not be easy to bridge but it is a positive sign that all Nato allies and Russia sat down around the same table and engaged on substantive topics.”

But he conceded: “There is a real risk for a new armed conflict in Europe,” and warned that Russia would face “severe consequences” if it used military force.

The Nato-Russia Council meeting will be followed on Thursday in Vienna by a third round of talks with Moscow, in the Organization for Security and Cooperation in Europe (OSCE), currently chaired by Poland.

After that all sides would have to go back to their capitals for leadership decisions on whether to continue diplomacy. Sherman said there was space for dialogue to address Russian security concerns and “identify solutions that enhance the security of all”. In Geneva the US raised the possibility of reciprocal agreements on missile deployments and military exercises.

Sherman said: “Russia most of all will have to decide whether they really are about security, in which case they should engage, or whether this was all a pretext and they may not even know yet.”

In an interview with the Guardian, Ukraine’s former defence minister Andriy Zagorodnyuk said a Russian operation against Ukraine now appeared inevitable, once diplomatic talks with the US, Nato and the OSCE concluded this week.

“They [the Russians] have created momentum. They want to use that momentum. They need to do something,” Zagorodnyuk – who served as defence minister in 2019 and 2020 – said. He added: “Moscow’s statements are extremely aggressive to the point of being rude.”

But he said it was “very unlikely” the Kremlin would carry out a “large-scale invasion” of Ukraine. Although it would be relatively easy for the Russian army to seize territory, occupying soldiers would soon find themselves fighting an unwinnable guerrilla war, he said.

“Ninety per cent of the Ukrainians do not want Russia. There would be huge resistance here,” he said. The Ukrainian army would immediately move to “small group tactics”, with regular soldiers working effectively as partisan units.

He added: “It will be similar to what the Russians did to Napoleon in 1812. The war would be brutal and long.”

Zagorodnyuk predicted the Kremlin was more likely to launch a hybrid war. That might include cyber-raids, attacks on critical infrastructure including power facilities and a massive information campaign. The strategy would be to “coerce Ukraine” into submission, he said.

Ukrainian government sources suggest Russia is considering a “staged provocation” inside Ukraine which could then be used to justify a bigger attack. This might include a “violent” incident at the Russian embassy or consulate, which Moscow could then blame on far-right Ukrainian extremists.

No additional weapons have arrived yet, with the decision conveyed only recently to congressional staffers during a classified briefing, according to Politico. The Pentagon last month delivered small arms and ammunition under the terms of a previous $60m aid tranche.

Ukraine has asked the US and EU countries to supply it with equipment that could be used by mobile units. These include Javelin anti-tank missiles and portable air defence systems such as Stinger missiles, as well as sniper rifles, drones and counter-battery radars.

The Nato-Russia Council meeting, the first since July 2019, was called in response to rising tensions over Ukraine, after the Kremlin stationed more than 100,000 Russian troops and heavy weaponry at the border of its western neighbour.

The latest gathering followed the inconclusive talks between US and Russian officials in Geneva on Monday, where both sides set out their opposing points of view on Ukraine.

Moscow has dismissed western concerns that it is planning an attack, arguing it needs guarantees about security. “The situation has simply reached such a critical point in terms of pan-European security and the national interests of our country … that we cannot delay further and the concerns we have voiced need concrete answers,” the Kremlin spokesperson Dmitry Peskov said.

Against that backdrop, expectations of a breakthrough from the latest talks were low. Tomáš Valášek, a Slovak MP, who served as his country’s ambassador to Nato between 2013 and 2017, said the Nato-Russia Councils he attended “tended to be mere formalities, but not for lack of trying on the Nato side”. He said: “The Russian side wasn’t prepared to go beyond agreed notes, agreed talking points so in the end these meetings ended up being very formalistic without breaking any new ground.”