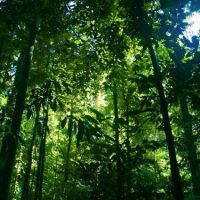 The Nature Conservancy of Canada spent the last year negotiating the purchase of 1,450 square kilometres of the boreal forest near Hearst, Ontario, from pulp and paper giant Domtar, The Canadian Press reports.

The company hasn’t logged in the area for more than a decade and began working with the Conservancy in January 2021 to make a deal for the land.

Now named the Boreal Wildlands, the region is twice as big as the entire city of Toronto, and will be protected from industrial development including logging and mining.

The Boreal Wildlands is home to 100 lakes, 1,300 kilometres of rivers and streams, and is a critical habitat for many of Canada’s most iconic species including black bears, wolves, moose, and the endangered woodland caribou. It is also a massive natural carbon sink, storing the equivalent of the lifetime emissions from three million vehicles.

“Boreal Wildlands, as you’ve seen, is a heaven for biodiversity,” said Grenier. “But it’s also a very important natural defence against climate change. The vast forests, the rich soil, and the deep peatlands form a large carbon sink. Conservation keeps carbon in the ground, and the land will continue to absorb more greenhouse gas emissions over time.”

On the same day, U.S. President Joe Biden signed an executive order to protect U.S. old growth forest from wildfires, compile an inventory of old growth across the country, and plant 1.2 billion trees, Al Jazeera writes. “Our forests are our planet’s lungs,” he said, so reforestation “makes sense, and it also makes a big difference, including in our cities and on our city streets.”

A White House fact sheet connects the announcement to U.S. commitments to forest protection under the Glasgow Forest Pact adopted by more than 100 countries during last year’s COP 26 climate summit.

In Ontario, the Nature Conservancy intends to create a carbon offset market with the area, selling carbon credits to companies and individuals trying to offset their own emissions. That money will contribute to protecting the area, and to other projects.

The C$46-million conservation project is supported by both the federal and Ontario governments, as well as private donations to the Nature Conservancy. While The Canadian Press reports the conservation project as a done deal, the Globe and Mail frames the announcement as the launch of a “public campaign to raise funds for the purchase” of the three large tracts of boreal forest.

“We understand that protecting and conserving nature is one of the most important steps we can take to curb biodiversity loss, while also fighting climate change and advancing reconciliation,” said federal Environment Minister Steven Guilbeault. “Nature is the glue that binds all these important causes together.”

Rob Melton, senior vice-president at Domtar, said the company has owned the land for more than 50 years and logging projects have supplied Domtar’s pulp and paper mills in Ontario.

“We felt like the opportunity to participate in this project with NCC was actually of more value to Domtar and utilizing this land for conservation than it was for future harvesting,” he said.

The Nature Conservancy is now working on a property management plan to determine access to the wildlands for outdoor recreational use.

The main body of this report was first published by The Canadian Press on April 22, 2022.