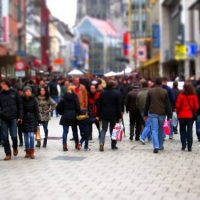 Human behaviour and social attitudes are key drivers of the Earth’s future climate, say scientists, but climate and energy models have failed to take them into account. A new study published in the journal Nature addresses this critical knowledge gap with a model that includes social, political, and technical factors that drive climate policy and emissions pathways.

“Although the links between society, policy, technology, and climate change are complex, they are not unknowable,” writes lead author Frances Moore, an assistant professor in the Department of Environmental Science and Policy at the University of California Davis, in a guest post for Carbon Brief.

For the first time, Moore and her team’s “climate-social system” model inputs complex psycho-social factors that influence climate policy, alongside the standard ones of emissions and climate signals. The model includes individual “cognition” of extreme weather, related shifts in public opinion and behaviour, and policy responses that follow and drive such shifts.

The model’s different components are connected through eight key feedback processes borrowed from a range of disciplines, including psychology, political science, and law.

One of those processes is the power of social networks to shape world views and pressure individuals to conform. In her discussion of “social-conformity feedback” in the study, Moore says that “the model includes the social conformity effect in two ways: formation of public opinion regarding climate policy and individual decisions on adopting pro-climate behaviour.”

Another critical feedback involves individual perceptions of climate change. Many studies show that people “are more likely to report believing in climate change if the weather is (or is perceived to be) unusually warm,” Moore writes. But there is also evidence that one’s attitude to the weather, especially as it intersects with the idea of climate, is strongly shaped by “motivated reasoning,” that is, “the rejection of new information that contradicts pre-existing beliefs.”

As well, “the perception of weather anomalies might well be complicated by a ‘shifting-baselines’ effect in which people’s perception of normal conditions is quickly updated on the basis of recent experience of weather.”

A third feedback system, known as the “expressive force of law,” is grounded in the perception that “law and regulation work on society not only by punishing undesirable behaviour but also by signalling what kind of behaviour is praiseworthy and what is reprehensible.”

Citing the case of legalizing gay marriage, Moore adds, “this signal is particularly important if individuals have imperfect information about the distribution of attitudes or behaviour within a reference population.”

These and the other feedbacks included in the model stand to create socio-political “tipping points,” similar to the ones at play in the climate system. And it is these feedback systems and their “tipping points” that will either “accelerate or stymie” climate policy.

Moore and her colleagues modelled 100,000 possible future policy and emissions trajectories, more than 90% of which “produce warming of between 1.8 and 3.0°C by 2100.”

Critically, the emergent policy-emissions trajectories calculated by Moore and her team “are strikingly similar to previous work that estimated the impact of countries’ pledges under the Paris Agreement for emissions in 2030 and 2050.” They also “match findings from a number of recent papers that use different approaches.”

Unlike those other studies, though, Moore’s model reveals something of the complex weave of social, political, and technical forces at work behind a particular emissions trajectory.

For example, the “aggressive action” trajectory, which limits global heating to 1.8°C, is characterized by a strong social-conformity feedback, together with a “highly persuasive” expressive force of law. By contrast, both the “delayed recognition” and “little and late” trajectories, which constitute 5% of model runs but have global heating cresting as high as 3.6°C, “tend to be characterized by weak social conformity feedback in public opinion”. They also reflected “cognitive biases limiting any effect of perceived climate change in increasing support for climate policy and an unresponsive political system (high status quo bias) that slows climate policy even as public support increases.”

Moore flags the “public perception of climate change and their experience of weather; the future cost and effectiveness of mitigation technologies; and the responsiveness of political institutions” as the most important socio-politico-technical factors “in determining emissions pathways and, therefore, warming over the 21st century.”

re:Focus on Retail and Logistics | Catalin Pozdarie (CEO Hervis): Delivery and refund times are areas where innovation is truly a must