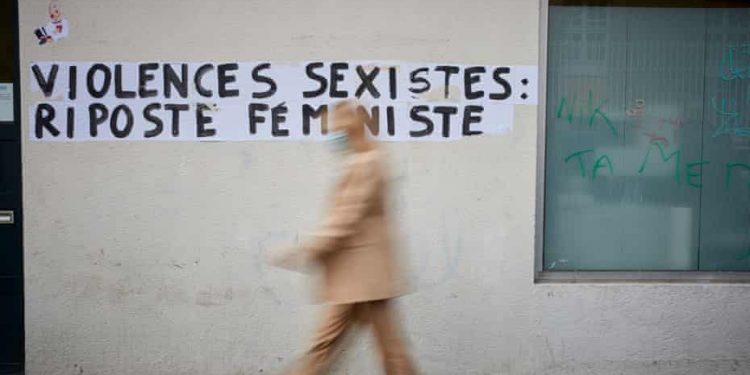 Feminist campaigners in France are calling for tougher government action to combat violence against women and girls after three women were allegedly killed by their current or former partner on the first day of 2022.

The body of a 28-year-old military recruit who had been stabbed to death was found near Saumur in western France on Saturday. The local prosecutor, Alexandra Verron, said a 21-year-old man, also a soldier, had been arrested and investigators were looking into a possible femicide – the killing of a woman by her partner or ex-partner.

In eastern France, police discovered the body of a 56-year-old woman with a knife in her chest after neighbours at Meurthe-et-Moselle reported a violent dispute. The victim’s husband was questioned by police and was due to appear before a judge on Monday.

On Sunday, a 45-year-old woman was found in the boot of a car at a property in Nice. She had been strangled. Police were interviewing the woman’s former partner, a 60-year-old man who reportedly admitted having a violent altercation with his ex-wife, and their 24-year-old son, in whose vehicle the body was allegedly discovered.

The mayor of Nice, Christian Estrosi, said he was devastated by the alleged killing and described it as a “horror”.

The collective #NousToutes accused the French government of remaining “scandalously” silent on the grim start to the year for women. It said an estimated 220,000 women reported conjugal violence every year, but judges had ordered the use of electronic bracelets in only 379 cases.

Lena Ben Ahmed, of #NousToutes, told France Info radio: “These femicides are not isolated cases. They’re not the occasional news story. They are systematic violence. The whole system colludes in these murders because it banalises and minimises sexist and sexual violence. That’s why we are scandalised by the government’s silence.”

Féminicides Par Compagnons ou Ex, the Femicide by Partner or Ex association, which announced the figures for last year, said it was only an approximate figure and almost certainly an underestimate.

“Numerous events that are being looked into and are subject to the omerta of the prosecutors’ offices haven’t been counted,” it said.

“No, these’s aren’t ‘family dramas’ or ‘separation dramas’ or ‘crimes of passion’; they are conjugal killings carried out by frustrated men who think they have the right to kill … who because of the patriarchal education given to men think they possess their women and children and can do with their lives as they wish,” the association added.

Last August, the interior minister, Gérald Darmanin, announced new measures to combat violence against women and girls, including prioritising complaints of conjugal violence and ensuring each police station and gendarmerie had at least one officer specialised in treating female victims.

“The number of police and gendarmerie interventions for intra-family violences remains very high, with more than 400,000 (in 2020), which is 45 every hour,” Darmanin said. “Not a day goes by without [specialist police] freeing a woman or children who are being held hostage,” the minister added.

In the UK, the Femicide Census estimates one woman is killed by a man every three days, 62% of them by a current or former partner. A history of abuse was recorded in 59% of killings of women carried out by partners or ex-partners or a male relative.

Françoise Brié, the director of the Fédération Nationale Solidarité Femmes (National Federation of Women’s Solidarity), said tougher legislation was needed, including allowing women to conceal the address where they were living if they leave the family home and a violent partner with their children.

Ben Ahmed, of #NousToutes, added: “We need training, education, prevention from a young age in schools, lycées, colleges … obviously we are calling on all the presidential election candidates to make concrete promises that include extra personnel, money and materials to address the question of sexist and sexual violence.”