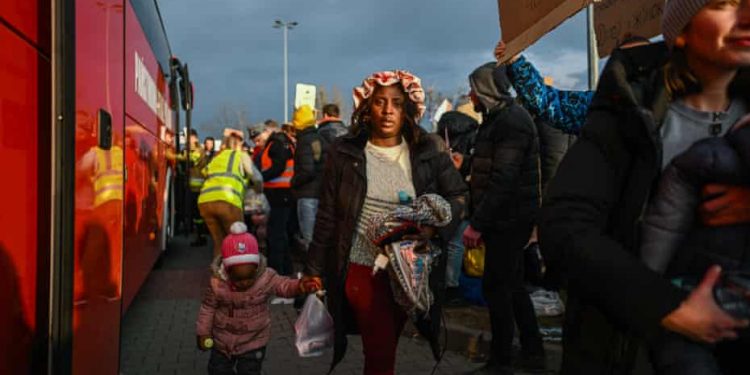 The Nigerian government has condemned the treatment of thousands of its students and citizens fleeing the war in Ukraine, amid growing concerns that African students are being discriminated by security officials and denied entry into Poland.

A deluge of reports and footage posted on social media in the past week has shown acts of discrimination and violence against African, Asian and Caribbean citizens – many of them studying in Ukraine – while fleeing Ukrainian cities and at some of the country’s border posts.

They are among several hundreds of thousands of people trying to escape the country as civilian casualties and destruction mount.

More than half a million people have fled Ukraine since the Russian invasion last week, according to the UN’s refugee agency, UNHCR.

The Nigerian president, Muhammadu Buhari, said on Monday: “All who flee a conflict situation have the same right to safe passage under UN convention and the colour of their passport or their skin should make no difference,” citing reports that Ukrainian police had obstructed Nigerians.

“From video evidence, first-hand reports, and from those in contact with … Nigerian consular officials, there have been unfortunate reports of Ukrainian police and security personnel refusing to allow Nigerians to board buses and trains heading towards Ukraine-Poland border,” he said.

“One group of Nigerian students having been repeatedly refused entry into Poland have concluded they have no choice but to travel again across Ukraine and attempt to exit the country via the border with Hungary.”

Nigeria’s special adviser to the president on diaspora affairs, Abike Dabiri-Erewa, said: “Africans are being denied entry through the Ukrainian borders. The minister of foreign affairs, Geoffrey Onyeama, has taken this up with the Ukrainian ambassador. Our people who want to leave must be allowed to.”

Amid chaotic and emotional scenes at Ukraine’s borders with Poland, as well as Romania and Belarus, where a number of African governments have advised citizens to head to, the treatment of African and Asian people has caused outrage.

ManyAfrican students have condemned the difficulties they have faced trying to escape the conflict, reporting hostility from security forces, ordinary Ukrainians and border staff.

Samuel George, a 22-year-old Nigerian software engineering student, drove from Kyiv, along with four of his friends, fellow students from Nigeria and South Africa, to the Polish border. Queues of cars full of people trying to leave spanned 31 miles (50km) to the border. Yet when some men who were in the queue noticed they were Africans, he said, they stopped their vehicle.

“They immediately saw that the Ukrainians could pass but when they realised we weren’t Ukrainians they stopped it. They told us we couldn’t move forward and wouldn’t let us join the queue,” George said.

When they tried to defy them, he said the men attacked and vandalised their windscreen. “They demanded $500 – we begged and negotiated to pay $100. We had to leave the car and trek. We were walking for almost five hours to the border with Poland. One of us was sick. The temperature was freezing, it was so tough.”

At the border, Ukrainian officials “showed racist acts”, attempting to force them to the back of the queue, George said. “So many of us are still stuck there facing challenges. Some of them went to the borders but they were sent back and are still trying to leave.”

Emily*, a 24-year-old medical student from Kenya, said she spent hours waiting for Ukrainian border guards to let her enter Poland because they were prioritising Ukrainian nationals.

“We had to wait five hours but we were lucky: we met some people there who had spent days waiting in the foreign national queue,” she said.

After eventually entering Poland she boarded a free bus, organised by an NGO, to a hotel near Warsaw that was offering free board to Ukrainian refugees. However, the hotel refused to take her and her Kenyan friends in after examining their documents.

“The staff said, ‘Sorry, we can’t admit you because this was meant only for Ukrainians,” she said. The hotel also refused to give Emily a room after she offered to pay for one.

Instead, Emily’s family in Kenya got in touch with a Polish acquaintance, who was able to find accommodation for Emily and other students with friends in Warsaw.

In footage posted on social media, men identified by students as Ukrainians were seen abusing and assaulting them near borders, preventing them from leaving.

In response to calls for information and advice for students worried about leaving Ukraine, several support groups have been set up on WhatsApp, Telegram and Facebook by people advocating for more assistance and by students who have been trying to leave.

Government officials from Ukraine and Poland have said all refugees are welcome, adding that border officials were working through hundreds of thousands of cases.

In the weeks leading up to the war it was clear that increased support was needed but the government did not act, Samuel said, condemning what he described as a lack of quick and concise assistance from Nigerian authorities.

One student said they tried to contact the consulate but failed to reach an official. “I don’t see how in a situation like this, where the citizens are in a country where there is war, that a country won’t do everything to rescue their citizens, but that is where we are,” they said.

“The whole situation is tragic, the war is so tragic. So many men were staying behind to fight with the army. I was seeing so many greeting their wives and families farewell. It felt like the world was coming to an end.”

2021’s Most-Liked Instagram Posts Were From Ariana Grande, Billie Eilish, And A Mermaid