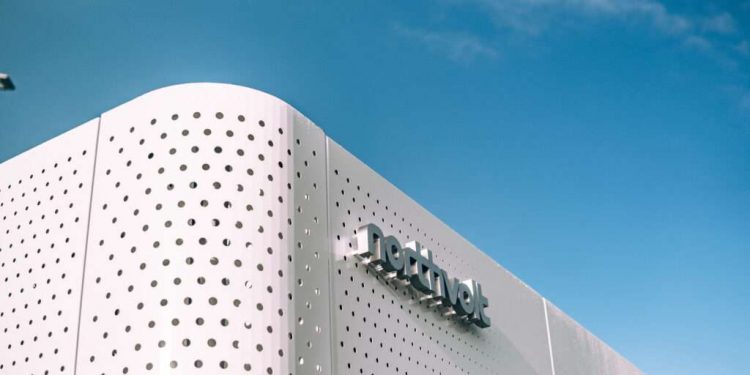 Close-up detail of a BESS assembled by Northvolt Systems, for a site in Rocklunda, Sweden. Image: Northvolt.

The factory, Northvolt Drei, will have an annual production capacity of 60GWh and Northvolt has signed a Memorandum of Understanding (MoU) with the north German state and the Schleswig-Holstein town of Heide, it announced this morning.

The lithium-ion battery manufacturing plant will open before the end of 2025, employing 3,000 people when fully ramped.

Northvolt claimed the region offers opportunities to make batteries sustainably: there is plenty of onshore and offshore wind generation nearby, as well as interconnectors to bring in renewable energy from Denmark and Norway. It’s an approach to siting the manufacturer has taken with its flagship production facilities in Sweden, where the share of renewable energy from wind and hydro is also very high.

A recycling plant on-site is also being planned at Heide to take batteries directly from EVs as well as being able to reuse byproducts from the production process. With Ascend Elements recently signing a deal to recycle battery scrap from SK’s two Georgia, US, battery factories, the signs are that battery recycling can embody a whole value chain approach.

Founded in 2016, Northvolt has secured more than US$50 billion in orders for batteries from the 170GWh it currently has in its development pipeline. It is also developing a US$750 million R&D centre in Sweden.

Its first gigafactory, Northvolt Ett in Skeleftea, Sweden, produced its first cells shortly before the end of 2021 and the company raised US$2.7 billion in investment last year alone, ranking it top among venture capital (VC) funding recipients in the battery storage sector according to analysis group Mercom Capital.

It had previously planned to build a battery plant in Germany in partnership with Volkswagen, a 16GWh facility in Saltzgitter, but Northvolt sold its share in the joint venture (JV) to the automaker, which is also one of its bigger customers.

While the majority of Northvolt’s customer partnerships are in the automotive sector, the company has signed offtake deals with stationary storage customers including Fluence, with which Northvolt is co-developing battery energy storage systems (BESS) solutions.

It has also established its own stationary storage division, Northvolt Systems, and is building a BESS assembly plant in Gdansk, Poland.

It was not clear from Northvolt’s announcement today whether Northvolt Drei will be focused entirely on batteries for EVs and the company had not yet responded to an enquiry from Energy-Storage.news at the time of publication.

Although 15 years ago many had tipped Europe to become a leading manufacturing centre for solar PV, it lost the opportunity, Northvolt Systems president Emad Zand wrote in an article for the newest edition of our quarterly journal PV Tech Power Vol.30.

The continent could become a leading global supplier of battery storage, Zand wrote, but needs to embrace the opportunities of this new industry. Northvolt will invest US$200 million into building the BESS factory in Poland, according to Zand’s article.

“Batteries are rapidly becoming a cornerstone technology of energy, mobility and societal functioning at large. For Europe to transition effectively to net zero, it requires battery systems of its own. But the opportunity is much greater. We missed our chance with solar PV, let’s not make the same mistake with batteries,” Zand wrote.

Northvolt has previously suggested that around a fifth of its batteries could find their way into BESS projects.

Benchmark Minerals has forecasted that Europe will reach 789.2GWh of lithium-ion battery gigafactory production capacity by 2030. It is currently far ahead of the US in its manufacturing ambitions, but steps are being taken by both public and private entities in the US to start catching up.

Military deployed at London hospitals due to Omicron staff shortages