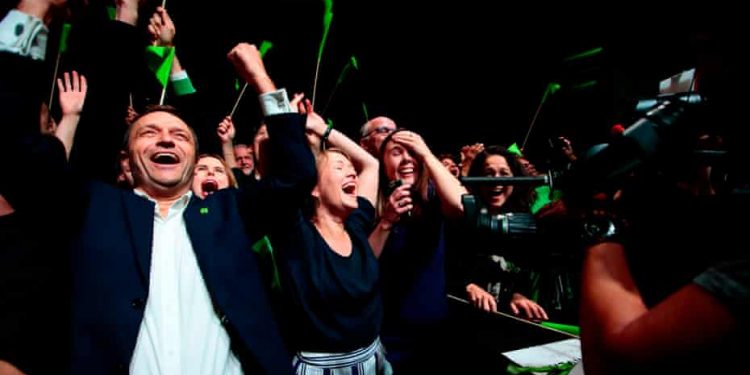 Norway goes to the polls on Monday in parliamentary elections that are forcing western Europe’s largest oil and gas producer to confront its environmental contradictions.

Climate issues have dominated the campaigning since August, when the UN’s Intergovernmental Panel on Climate Change published its starkest warning yet that global heating is dangerously close to spiralling out of control.

The report gave an instant boost to parties calling for curbs on drilling: the country’s Green party – which wants an immediate halt to oil and gas exploration, and no further production at all after 2035 – saw membership surge by nearly a third.

“The International Energy Agency’s Net Zero report in May had already made it plain that there was no room for oil and gas, and so the IPCC report really hit home,” said Arild Hermstad, the Greens’ deputy leader. “This really is the climate election.”

But while polls predict the centre-left opposition will oust the Conservative-led coalition that has ruled Norway for eight years, the fate of the industry that has made Norway one of Europe’s most prosperous nations is far from sealed.

The country may be a leading proponent of green energy, generating nearly 95% of its electricity from hydropower, and ensuring through a range of generous incentives that seven out of every 10 new cars sold are electric.

But fossil fuels still account for 40% of its exports. The oil and gas industry employs more than 200,000 people – about 7% of the total workforce – and through it the country has built up the world’s largest sovereign wealth fund, worth £1tn.

Pressure is mounting on Norway to change by emulating neighbouring Denmark, which is ending fossil fuel exploration and aims to halt all production by 2050. It also plans and plans massive investment in sustainable power.

A UN human rights council report on Norway last year was explicit, calling on the country to “prohibit further exploration for fossil fuels, reject further expansion of fossil fuel infrastructure, and develop a just transition strategy for workers and communities”.

But the message is a hard one to sell. “It will be a massive job to move Norway out of the oil industry,” Hermstad said. “People worry for their work, for their standard of living. As long as the Conservatives are guaranteeing that oil jobs will continue, those calling for an end to drilling look like the threat.”

Norway’s main centre-right and centre-left parties, the Conservatives and opposition Labour, are in broad agreement that production should continue past 2050, arguing that the green transition will take time, and oil revenues can help fund it.

Wrecking Norway’s economy will not help, they argue, and if Norway stops producing, other countries will step into the gap. “They actually argue that because we produce cleanly, it will be better for the environment for Norway to continue,” Hermstad said. “It’s not true. But people like to hear it.”

Nonetheless, the Greens could find themselves in government: the rightwing coalition of prime minister Erna Solberg is forecast to lose, but the margin of the left’s predicted victory is unsure, and a Labour-led coalition could need the support of one or more smaller parties to reach a majority of 85 seats.

An actor, two big bees and a lot of experts: a week spent tackling the planet’s problemsRead more

Labour, led by former foreign minister Jonas Gahr Støre, is tipped to be the largest party with a projected 46 MPs, but it too is set to lose seats – leaving its preferred coalition, with the middle-of-the-road Centre party and the social democrat Socialist Left party with only the slimmest possible majority.

That could see the Greens, on target for eight seats, or the far-left Red party enter government, potentially giving the environmentalists crucial leverage in a left-leaning coalition that would be deeply divided over fossil fuel policy.

Labour has said it would not form a coalition with any party demanding a halt to all exploration or production. But its key allies disagree on the issue, with the Centre party backing continued exploration and the Socialist Left opposing it. Some kind of deal, the Greens hope, will have to be brokered.

Much will depend on whether the smaller parties pass Norway’s so-called vote-levelling threshold, which rewards parties that win more than 4% of the vote nationwide but not many seats outright.

But it will be hard for Norway to give up its oil and gas addiction. Hermstad said: “In a debate last week, I asked the Conservative candidate when would be their preferred date to end production. He said: ‘In about 300 years’ time’.”