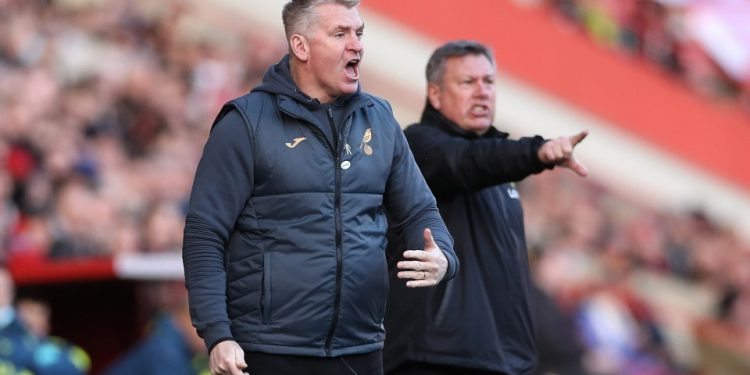 The Canaries are rock bottom of the league and on a run of five straight defeats – but fans have managed to find a lighter side to their current malaise.

Smith is having a hard time shifting Norwich’s losing mentalityGetty

And fans haven’t had much to cheer aboutGetty

Norwich have scored just one goal in their last seven league games, and even struggled to break down League One side Charlton in their last fixture in the FA Cup.

Milot Rashica eventually broke the deadlock late on against the Addicks for a 1-0 win, but fans still spent much of the game poking fun at their misfortune.

With the game scoreless until the 79th minute, away fans brought out a chant that emerged during a 3-0 league loss to Crystal Palace with the words ‘Let’s pretend we scored a goal’.

After a few verses, a countdown from 10 then begins in the stand, which finishes with wild celebration.

This may look like a standard goal celebration, but in fact the ball hadn’t even hit the net

Despite many enjoying the display of humour, manager Smith was unsurprisingly not one of them.

“I can be honest and say I don’t like the sarcasm from our own fans,” he said.

“We need to be together in this fight to stay in the league and as I’ve said the reasons for our performances and the results in the previous three Premier League games.

“We need our supporters to be with us as well, and I know at times there is only a minority, but I would ask them to refrain from that and get behind us and hopefully we can give them something to shout at.”

Smith was named Norwich boss during the November international break, taking the role days after being sacked by Aston Villa.

He replaced Daniel Farke who had just helped them to their first win of the season, a 2-1 victory over Brentford.

Better times looked on the horizon when Smith’s first game in charge saw another 2-1 victory, this time over Southampton, giving the Canaries back-to-back league wins.

However, despite draws against Wolves and Newcastle, Norwich have reverted to type with a five game losing streak in the top flight.

Smith, though, was keen to remind dissenting fans of why they are wrong to complain.

“It’s only three games ago that I was being told by Norwich fans that our performance against Manchester United was up there with top performances,” he explained.

“So hopefully we can get back there and together with the supporters we can all be pulling in the same direction.”

A lifeline for Baltic SMEs

Human and minority rights violations in Belarus must end immediately