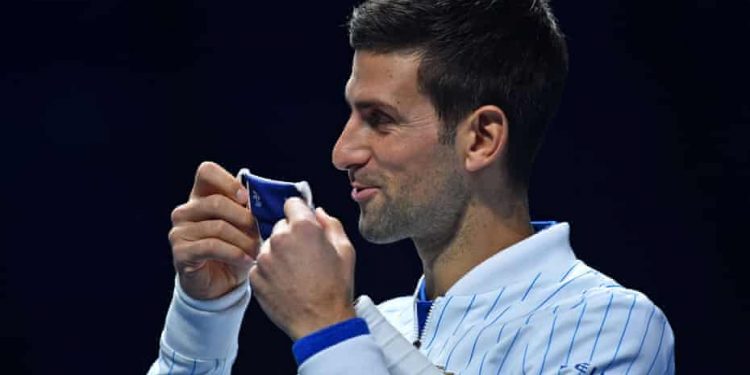 Novak Djokovic’s attempts to compete at the Australian Open this month were thrown into fresh doubt on Wednesday amid a spiralling outcry over his controversial “medical exemption” agreed by the tournament’s organisers.

The whereabouts of the world No 1 and reigning Australian champion were in doubt after he was held up at passport control at Tullamarine airport in Melbourne, the host city of the tournament, for several hours late at night.

The Victoria state government said it had refused to formally support Djokovic’s visa application and it was reported that the visa with which he attempted to enter Australia does not allow for exemptions for unvaccinated applicants.

The exact grounds for Djokovic’s exemption are unclear, although his opposition to vaccination is well known, fuelling the criticism inside Melbourne, Victoria and across Australia. Djokovic is seeking to win his 21st grand slam singles title, overtaking Roger Federer and Rafael Nadal, at the tournament beginning on 17 January.

Scott Morrison, the Australian prime minister, added his voice to the furore, saying Djokovic’s presence in Melbourne was still not certain and he would be “on the next plane home” if he is unable to provide proof of his medical exemption. “If that evidence is insufficient, then he won’t be treated any different to anyone else and he’ll be on the next plane home. There should be no special rules for Novak Djokovic at all. None whatsoever.”

Victorian officials were asked by the federal authorities to formally support Djokovic’s visa application, which led Jaala Pulford, the state’s acting sports minister, to announce on Twitter that the state would not be doing so.

“The federal government has asked if we will support Novak Djokovic’s visa application to enter Australia,” Pulford said. “We will not be providing Novak Djokovic with individual visa application support to participate in the 2022 Australian Open grand slam [tournament]. We’ve always been clear on two points: visa approvals are a matter for the federal government, and medical exemptions are a matter for doctors.”

Djokovic announced on Tuesday that he would be flying to Australia after receiving an “exemption permission”, rather than vaccinating himself against Covid, immediately prompting backlash from the Australian public and politicians.

As the nine-times Australian Open champion embarked on his journey to Melbourne, criticism of him hardened. Karen Andrews, the federal home affairs minister, released a statement suggesting the federal government could revoke Djokovic’s exemption unless he provided “acceptable proof” of the reasons for his medical exemption at the border.

Victorians have endured lengthy lockdowns and there is significant anxiety about rising Covid cases as Australia struggles with the Omicron surge. On Wednesday Victoria recorded a record 17,636 new cases and a rise in hospitalisations, prompting non-urgent elective surgeries to be reduced.

Additionally, Morrison’s government is under fire for its handling of Covid and his refusal to make basic provisions free or affordable. Simple lateral flow tests are sold out at supermarkets and pharmacies across the city, most available are sold for around A$30 (£16) and others have been subject to price gouging from some companies.

The Australian tennis legend Rod Laver said in an interview with the Herald Sun, stating that Djokovic should reveal the reason he was granted a medical exemption. “If he’s got a reason for [the exemption] then … we should know it,” Laver said. “Yes, you’re a great player and you’ve performed and won so many tournaments, so, it can’t be physical. So what is the problem?”

Djokovic’s fellow world No 1, Ashleigh Barty, was asked about Djokovic after her opening match of the season in Adelaide. Barty noted the difficulties faced in Victoria but she declined to wade into the debate around Djokovic.

“I know how hard it has been for Australians all around our nation, but in particular Victorians have had a real rough trot over the last 18 months and two years,” Barty said. “I understand why they may be frustrated with the decision. Ultimately I have no interest in speaking about Novak’s medical history. It’s not my decision. Those decisions are made. They’re completely out of my control.”

Shortly after Djokovic announced his “exemption permission”, Tennis Australia clarified that Djokovic had been granted a medical exemption and that his application was reviewed by two separate independent medical panels, firstly from Tennis Australia and then provided by the Victorian government. The personal information of each applicant was redacted. Craig Tiley, the Tennis Australia chief executive, revealed 26 tennis players and support staff had applied for exemptions with only a handful receiving them.

On Wednesday Tiley continued to emphasise the robustness of the process that led to Djokovic receiving an exception but he acknowledged the public’s frustrations. “Some of you will be upset about the fact that Novak has come in because of his statements of the past couple of years around vaccination,” Tiley said.

“However, it’s ultimately up to him to discuss with the public his condition if you choose to do that, and the reason why he received an exemption. We as an event, also as a state, as a country, will do everything we possibly can to give everyone an equal opportunity to come into the country.”

Last year Djokovic said he was “opposed to vaccination” and added: “I wouldn’t want to be forced by someone to take a vaccine in order to be able to travel … But if it becomes compulsory, what will happen? I will have to make a decision.”