Over 160 passengers still missing from train attacked in Nigeria 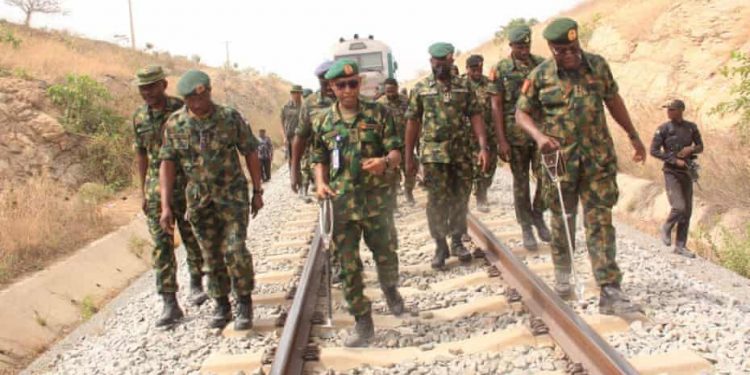 More than 160 passengers who were on a train that was attacked in the northern Nigerian city of Kaduna last month remain missing or unaccounted for, as details of possible collaboration between Boko Haram jihadists and local bandits have emerged.

Ten people were killed, two in the weeks since the attack on March 28, when gunmen bombed the rail tracks, derailing the train before gunning down passengers and train staff, and abducting scores of people.

The Nigerian Railway Corporation that runs the train service said earlier this month that 168 people were unaccounted for, including over 140 passengers it had not been able to reach through registered contacts. At least one person has paid a ransom and been released. A relative of two of the victims said families were not aware of any other freed captives by the assailants.

On Thursday, a spokesperson said that while there had not been an update on the number of passengers missing in two weeks – to the anguish of relatives – new information would be announced soon.

The attack was just one of many by armed groups targeting major transport links and communities across northern Nigeria in recent years and was the most significant targeting the train line between Abuja and a major city in northern Nigeria since it began operating in 2016.

The rail attack, like many incidents in the region, was initially suspected to be carried out by one of the so-called “bandit” terror groups, possibly by mainly ethnic Fulani gunmen who have launched deadly attacks from hideouts in a forested expanse stretching across northwest Nigeria and into the Sahel. The groups, some heavily armed and coordinated, have grown more deadly than jihadist groups. They emerged from a worsening conflict with farmers over encroachments on private farmland by pastoralists and disputes over land. Population growth, rural development and the climate crisis have fuelled a scarcity of land to graze cattle for herders, as historic grazing routes have vanished.

But in recent weeks, government officials and security experts have raised alarm at the involvement of jihadist groups, thought to be increasingly active in north west and central Nigeria. The region has become a nexus for several armed groups and an escape for jihadists facing more intense pressure from the Nigerian army in the northeast, but where insurgency continues to devastate lives.

On Thursday, Islamic State West Africa Province (Iswap), claimed responsibility for an explosion that it said killed or injured 30 people at a market where alcohol was sold in the eastern state of Taraba State, marking an expansion of the area where the extremist group has operated in.

Nigeria’s minister of information and culture, Alhaji Lai Mohammed, said last week that what was happening, “is a kind of an unholy handshake between bandits and Boko Haram insurgents”.

“Preliminary reports of what transpired at the Kaduna train attacks showed that there is a kind of collaboration between the bandits and the dislodged Boko Haram terrorists from the northeast. I can tell you very confidently that the federal government is on top of this matter,” he said.

Earlier this month, an unverified video circulating on social media appeared to show the attackers and dozens of abducted victims, some put forward to plead with the government for their lives. In the video, the assailants spoke in Hausa, saying the government knew their demands.

Yusuf Anka, a researcher based in Zamfara, northwest Nigeria said Ansaru – a Boko Haram unit in the region – had collaborated with bandits to stage the attack on the train, and that the group was seeking the release of their members detained by Nigerian authorities. “If their demands are met, and the prisoners are freed, it will be the first successful negotiation in the northwest for these jihadist elements.”

To ordinary people, attacks by bandits or jihadists were increasingly indistinguishable, he said. While in some areas jihadists have clashed with bandits, in some cases, they were working together. “There are also times where you will see cooperation between them, when attacking government institutions, especially the military or in attacks for financial motives,” Anka said.

Attempts by jihadist groups to rally bandits to their cause had largely failed, with jihadists often positioning themselves to local communities as guardians, offering protection, alternative governance and Sharia law in communities where bandits were intent on attacking.

Meanwhile, survivors and relatives of victims of the train attack have continued to express anguish.

One railway worker hid in the toilet along with two other employees when the train derailed, praying quietly, trying not to cry or make a sound as gunmen began shooting passengers on carriages.

“I’m still experiencing the trauma. I even had to move from Kaduna because I couldn’t sleep there anymore,” said the worker, who asked not to be named.

Four rail staff, friends of his, had been kidnapped, he said. Their relatives were desperately trying to raise ransom funds for their release, after almost a month in captivity.

In Abuja, over the last few weeks, a group made up of families of the kidnapped victims has held press conferences and marches, pleading with the government to help.

“There’s a seven-month pregnant woman, who only gives birth through cesarean section, only God knows what she’s going through … There’s a toddler who is twoyearsold for God’s sake,” a relative said, fighting back tears while others wept around him.

Many of the now frequent mass abductions and killings in Nigeria do not draw an official response from the federal government. When they do, such as after the train attack, President Muhammadu Buhari, pledged again to bring the attackers to justice.

Yet, relatives of victims have bemoaned that the government and security agencies rarely communicate updates and the government has maintained it does not pay ransoms. Families lament that even after victims negotiate directly with militants, security agencies do not collect information about the assailants from the families or the rescued abductees.

France and WHO: Working together for effective, united and inclusive global health governance